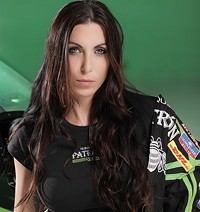 For fans of drag racing, this is a HUGE event. For those who couldn't care less, the event still offers some interesting asides. Take, for example, the story of atypical drag racer Alexis DeJoria, the daughter of John Paul DeJoria -- owner of the Paul Mitchell line of haircare products and Patrón tequila.

Yesterday, Daily RFT reached DeJoria at her home in Los Angeles to discuss what it's like to go from 0 to 100 mph and earn respect in a male-dominated sport.

Daily RFT: So how does the daughter of a shampoo and liquor magnate get interested in drag racing?

Alexis DeJoria: I've always enjoyed speed and fast sports. When I was sixteen a friend of mine took me to my first drag race, and I fell in love with the nitro cars. That's pretty much it. I was hooked after that.

Not only are you a female driver, but you're frequently tagged with the "heiress" title. What kind of biases have you had to overcome in drag racing?

I'd have to say not too much, actually. In NHRA we have more women competing than in any other auto sport. The other drivers and crews have been really accepting. I think the way I came up through the ranks dispelled any criticism about my commitment to the sport.

Seriously, though, what's the deal with women in motorsports? There's you, Danica Patrick in Indy Car, and your fellow NHRA drag racer, Courtney Force. Are all female race car drivers attractive?

Thank you. Yeah, there are some pretty good-looking women in racing. It certainly helps with press coverage. Personally, I would like to be known for my driving skills. But if it's something else that gets the attention, I'm okay with it so long as helps promote the sport.

How fast will you be going this weekend at Gateway?

I don't know what to expect in St. Louis, but we usually top 300 mph within four seconds and 100 mph inside one second.

What does that kind of thrust do to your internal organs? Do they fold inside each other, like an internal turducken? You get pretty warped out there -- experiencing five to eight Gs. You feel like you're being sucked down and forward at the same time. But I wear a seven point harness system. I have arm and head restraints. I'm not moving around too much in there.

You had a big crash a few years ago, yet you kept on racing. Why?

You're talking about the Englishtown (New Jersey) crash. Yeah, that was a big one. There was a little part on the car that wasn't welded on very well and the parachutes just popped off once they were deployed. That was a wild ride, and I was lucky. I walked away with just a few bruises where my knees hit the steering wheel. It's part of racing.

Until this year when you switched to the nitro-fueled class, you spent some five seasons driving alcohol-fueled funny cars for the Patrón racing team. We're taking it that those cars were not fueled with tequila, correct?

No. But that's kind of funny because my father has a friend who is really into motorcycles and made one that runs on Patrón.

Good God! What a waste of fine tequila! Save the Cuervo for that.

Speaking of Patrón, how involved is your father in your racing? He sponsors the team, of course.

He has been involved in racing for a while and is a big fan. He won't be in St. Louis this weekend but he comes to a lot of my races and brings his friends out, too. He's sponsored cars on other circuits, too (Nascar and LeMans). Just because he's my dad, his sponsorship isn't something that was going to be given to me. They stand by their company and are not going to put their name on something that wouldn't be beneficial.

Last question: What kind of car do you drive when you're not on the track?

A V-12 Bimmer? We're guessing it gets worse mileage than your Patrón funny car?

Sometimes. I have a tendency to gun it.