The Ladue List: Senior Girls Were Not the Only Target 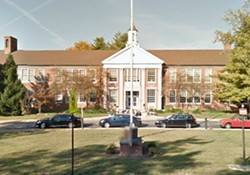 On Friday, Daily RFT explored a phenomena at Ladue Horton Watkins High School known as the "Senior List" -- a tradition where junior boys humiliate senior girls on the last day of class by passing out a sexually explicit list of insults and gossip.

However, Susan Dielmann, the Ladue District's director of communications, says that while the 2012 list was written by male students about female students, that's not the whole story.

"We know this list has gone any number of directions," she says. "There was a time when senior girls [wrote about] junior girls ... A while back the lists were being made about teachers."

The issue came to light after Ladue mom Ruth Ahlemeier's daughter showed up on the 2012 list. Ahlemeier went back and forth with the school for four months before turning to the media. Last week, she submitted a formal complaint with federal authorities at the Kansas City Office for Civil Rights saying that the school has not adequately investigated the matter and allowed the list to go undeterred for three decades. She charges the district is violating Title IX by allowing discrimination based on gender.

Dielmann, while acknowledging the list's existence and the school's difficulty stamping it out, says administrators have been anything but indifferent.

"We attempt to identiy and discipline [the authors.] The problem becomes when stacks of papers show up in bathrooms and cafeterias and stuff," she says. "It's much easier said than done. It's not a matter of the district not caring or wanting this to stop."

Dielmann also says -- as have commenters on our original post and email tipsters -- that senior girls haven't been the only target.

Sometimes younger girls write it about the elder class or vice versa. Some years the girls write nasty things about the boys. And, according to one teacher who Dielmann says has been with the district for 30 years, the list used to be all about insulting teachers, though she couldn't say if those lists were as sexual in nature as the 2012 list. Dielmann also disputes this being a "30 year long" tradition.

"It doesn't happen every year," she says.

Daily RFT also heard more than once that the 2012 girls retaliated in some fashion against the boys who wrote about them, but Dielmann says she doesn't know whether or not that's true.

She concedes that doling out punishment has been difficult. Ahlemeier complained that this is the first year that any of the list's authors have been punished -- Dielmann says to her knowledge that's true. As a way of preventing the list from making another appearance, she says the school already targeted a group of "influential" junior boys to try to persuade them to use their popularity to try to squash a 2013 list.

For now, the district has yet to receive formal notification of Ahlemeier's complaint against it, and Dielmann says once that happens they'll just have to wait and see if the Office for Civil Rights decides to investigate.

"We've followed our policies to the letter," she says. "If anyone can stop this behavior, we're in favor of it. No one wants it to stop more than we do."

See You in Court! Sex