Can Cops Draw a DUI Suspect's Blood Without Consent? US Supreme Court to Hear MO Suit

Did a Missouri state trooper violate the U.S. constitution in October 2010 when he arrested a drunk driver in Cape Girardeau and drew his blood, even though the driver refused?

Looks like the Supreme Court of the United States (SCOTUS) will now be making the final call on whether such a blood test amounts to an illegal "search and seizure" under the Fourth Amendment.

The nine justices in Washington, D.C. have agreed to hear Missouri state prosecutors' appeal in their case against Tyler G. McNeely, who -- by the way -- was pretty drunk that night he got pulled over. Nobody disputes that.

Here's what happened: In the wee hours of October 3, 2010, McNeely got stopped for speeding in Cape Girardeau by a corporal from the Missouri State Highway Patrol. The corporal noticed the driver's bloodshot eyes and slurred speech and asked him to perform some sobriety tests.

McNeely flunked those tests. The corporal arrested him, then asked if he would submit to a breath test, but McNeely refused. 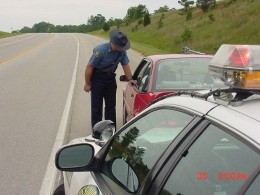 The coporal had a choice here. He was a 17-year veteran of the patrol who had, in the past, obtained warrants for blood tests. But he'd also just read an article in Traffic Safety News -- we don't subscribe -- that argued that warrants weren't necessary because of changes to Missouri law.

So he drove McNeely to a hospital. McNeely refused to be administered a blood sample, but the corporal ordered one to be taken anyway, and the results showed McNeely was "well-above the legal limit."

He was charged with DUI, but moved to suppress the evidence, complaining that the blood test constituted an illegal search and seizure under the Fourth Amendment. The ACLU of Eastern Missouri took up his case.

The Missouri Supreme Court took McNeely's side last January, ruling that the corporal was "not justified" in taking the sample because it was not an "emergency" situation where evidence was in danger of disappearing.

The state prosecutors have appealed.

Now the highest court in the land will be the final arbiter.