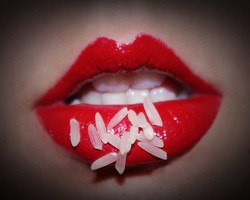 According to a new study from Consumer Reports, rice produced in the U.S. contains "worrisome" levels of arsenic. Tests performed by the magazine's researchers found elevated levels of the chemical in all kinds of everyday foods, like farina, rice cakes, and even in trusty Uncle Ben's.

"In virtually every product tested, we found measurable amounts of total arsenic in its two forms. We found significant levels of inorganic arsenic, which is a carcinogen, in almost every product category, along with organic arsenic, which is less toxic but still of concern," the report says. "Though rice isn't the only dietary source of arsenic--some vegetables, fruits, and even water can harbor it--the Environmental Protection Agency assumes there is actually no 'safe' level of exposure to inorganic arsenic."

The study also notes that rice produced in south-central states seems to be worse -- that includes rice coming out of Missouri.

Rice isn't a huge crop for the state, but it's still a significant one. Missouri is the fifth largest rice-producing state and most of the farms can be found in the "boot heel" of the state.

Arsenic is, of course, a potent poison, but the greater concern here is that it's a carcinogen. Consuming these products won't lay anybody out, but since rice is often used in foods served to very young children -- rice milk, some baby foods, rice crispies -- the fear is that it could impair their development.

It's been deemed acceptable for drinking water to contain 10 parts per billion arsenic. Uncooked rice grains from several different brands were found to contain between 40 and 200 parts per billion. Martin Rice, based in Bernie, had both its brown and enriched rice tested. The white rice contained 2.3 to 3.4 micrograms arsenic per serving; the brown rice showed 3.7 to 9.6 micrograms. That ranges between 113 to 455 part per billion arsenic. (Read the whole study here.)

The theories for why California rice fares better in these tests than producers in the central/southern states is that our rice farms may be on former cotton farms, a crop fertilized with arsenic, or from run-off from chicken farms.

The magazine is definitely sounding a warning, but the results aren't conclusive. For one thing, comparing acceptable drinking water levels to food levels is sort of fraught. We consume water constantly, these foods far more sporadically. And nobody is completely certain this will harm kids. But there is currently no FDA limit on arsenic in foods. The magazine, and others concerned about the issue, are calling for one.

Those who are truly alarmed by these results are recommending that kids not drink rice milk at all, and that their consumption of rice-containing products be kept to a minimum.

This is all to say -- don't go trying to murder anybody with a heaping bowl of Uncle Ben's. Ain't gonna work.