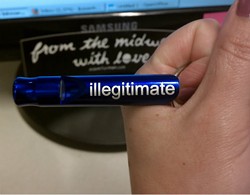 But the product has a major design flaw. As the producers say in their own promotional literature, there is no such thing as "illegitimate rape." So what are these things for?

"'Illegitimate rape' is a fictitious and totally offensive concept, so here are a few suggestions for how you can put your whistle to good use," the owner's manual reads. "1) Officiate a track and field event. 2) Volunteer as a crossing guard at your local school."

Amanda Zaydman, like most folks when they first heard about the magical ability of a raped woman's body to "shut that whole thing down," was pretty appalled back in August when the comments first hit the airwaves.

"A business school classmate called and said, 'Hey, I think we should do an actual illegitimate rape whistle,'" recalls Zaydman, a recent Wash U MBA graduate. "I immediately thought it would be a good idea."

The website for "Illegitimate Whistle" went up over that following weekend, and Zaydman and her unnamed partner (he technically works for some branch of the Missouri government and wants to remain anonymous) were up and running. Their product and tagline, "Sounding Off on Legitimate Stupidity," have been featured in Forbes and the D.C. political blog Roll Call. She's already sent whistles to 20 cities around the country.

But Zaydman says she's pleased now that the local press has taken note of her efforts.

"While for the rest of the country it might be the news story of the week, Akin is still doing well and leading in the polls," she says. "This project is really focused on the Akin-McCaskill race."

While Zaydman and Company are looking for an Akin defeat, it's not sending the money to Claire McCaskill. Zaydman says she's reached out to the McCaskill campaign to see if they're interested in partnering with Illegitimate Whistle in any way, but says she perceives wariness. All the profits are currently going to the Rape, Abuse & Incest National Network.

In the meantime, look to Illegitimate Whistle for a new bumper sticker and a video of other things whistlers can "sound off on" as "legitimately stupid."

Not to make light of the whole issue, but there are a few things we'd love to shriek "ILLEGITIMATE!" at: 1. This. 2. Any of these outfits. 3. Anytime this clown does anything. 4. You can definitely blow the illegitimate whistle at all 21 of these things.