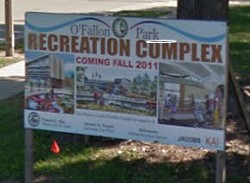 On Friday, when the aldermen returned from their summer break, French took the opportunity to point out in a letter to the mayor (which he also posted online) that concerns he expressed back in July about a deal to allow the YMCA to run the center were left unaddressed.

"I again ask that you provide me with the above information so that the board bill can be moved off of the informal calendar and passed with the full support of the Board," he wrote. "Getting this facility open, under terms that will allow it to be used by all of the people and families that helped pay for it, is my top priority."

The deal being proposed by Mayor Slay's office would have the YMCA manage the center with a hefty city subsidy. While the Carondelet rec center was opened in 2010 and is run under a similar deal, the O'Fallon park rec center is receiving a much bigger chunk of taxpayer money: $1.2 million. Since its opening, the Carondelet center's subsidy has dwindled to nothing.

French says the subsidy price tag has never been explained to him and that the money should be going to guarantee low-income kids can afford membership fees. French sponsored the bill that would approve the city-YMCA partnership, but placed it on the informal calendar until his questions have been answered or his demands met.

French says he either wants the fees for neighborhood residents dropped (monthly memberships would run $33 for young adults, $44 for adults and $57 for single-parent households), or else language adopted into the bill detailing the precise process for obtaining a membership scholarship.

"The Black Caucus will be sending a letter over to the administration today, again saying we need these things," said French on Friday afternoon. "We're fighting for a better deal for our constituents."

Jeff Rainford, Slay's chief of staff, calls the rec center project the mayor's "baby" and says he's not sure why French, who was previously happy with the YMCA's fee schedule and management proposal, is suddenly holding up the bill. The YMCA says they'll be able to open the center 90 days after the bill is approved.

"Halfway through, he pulled the bill and started criticizing the mayor," says Rainford. "We want people to be able to use it. It'd be a crying shame to build this palace on the hill and no one can use it."

Rainsford says there will be 1,300 guaranteed scholarships given to kids and their families, 650 will be distributed by the Boys & Girls Club of Greater St. Louis, which is supposed to partner with the Y to provide children's activities. In order to obtain the lower $25 membership, parents will have to show cause for need and bring in a paystub or W-2 form.

Rob West, the executive director of the Monsanto YMCA who will also run the O'Fallon rec center, says that's the way the Y has always done things.

"Anybody who comes in our facility is elligible for finanical assistance," says West. "That financial assistance can be as much as 90 percent off."

French says until he sees that in writing, the bill to open the center will remain on the back burner.

"As a completely 100 percent taxpayer funded building, I want to make sure every St. Louisan is able to access that building regardless of income."