NSFW: The Nude Photography Portfolio That Has a St. Louis Priest in Hot Water 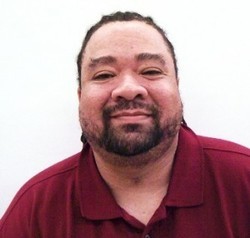 In these jaded times, we're somewhat accustomed to hearing about sexual misconduct by Catholic priests. Less so from Episcopal priests. After all, they have to live by way fewer crazy rules.

They can have sex, they can marry, they can be gay. Hell, they can even be women, believe it or not.

According to his online bio, Father John Kenneth Blair graduated the University of Missouri-Columbia, Eden Theological Seminary and Lindenwood University. He has a Masters of Divinity and an MA in counseling, and is the "Manager of Spiritual Care and CPE Supervisor for Christian Hospital." He's also certified to counsel drug and alcohol addiction sufferers.

The Post-Dispatch broke the story yesterday, seemingly spurred by a letter that was also received by the RFT. The anonymous author starts with a lengthy description of Blair's credentials, then includes a couple dozen photos of naked and semi-nude women purportedly pulled from Blair's Model Mayhem account, his Facebook page, and from the artwork page of Shameless Grounds, the sex-positive coffee house in Fox Park.

"The sexually explicit photos and material are, to say the least, unprofessional and highly unsuitable to a Christian man with these listed credentials entrusted to the spiritual care of troubled and impaired individuals," the letter reads. "He has the opportunity, ability and training to prey on emotionally weak and unstable women from a station of trust. What moral depravity is next?"

The Episcopal Diocese launched an investigation into Blair on Tuesday after also receiving a letter. The letter's author points out that Father Blair was investigated and reassigned in 2007 after another investigation for impropriety, but the P-D reports that the diocese didn't find anything to back up the claim.

All Blair's online accounts have been either locked down or removed, but we've scanned in the pictures from the letter.

Father Blair wouldn't comment on the investigation or say if the photos are indeed his (it's tough to see, but all the photos in that first spread are marked "Photography by John Kenneth Blair"). Andrew Mueller, the owner of Shameless Grounds, confirmed that Blair had once exhibited his photography there but wouldn't comment further. Later he posted this to the business's Facebook page:

Andy here, owner of Shameless. I wanted to comment on this news story, which just hit the presses today. We were approached for comment by the Post Dispatch, and by the Riverfront Times. I chose not to comment via the commercial media because in my experience, their motives are often convoluted, and their reporting lacks the curiosity and depth sufficient to be what I consider "fair". But I would like to comment here - in the shallow waters of Facebook, where this cannot be mistaken for "real news".

If that is indeed the case here - and the only thing this gentleman has done is create some perfectly legal fine-art photography involving consenting adults - I'm dismayed that anybody would consider that worthy of investigation, much less censure and punishment.

Yet such is the nature of sex negativity. Clearly, for some, the fact that a man could be both a leader in his faith, AND be a human being who is in touch and engaged with sexuality, however ethical that sexuality may be, is anathema.

To the self-annointed arbiters of "God's will", to acknowledge or show enjoyment of human sexuality is to show weakness of character and irreparable immorality. In the minds of these people, sex is limited to procreative use, under the strict adherence to guidelines from the church and state on when, where, and with whom. Think about that. A bunch of old men in robes have decreed just who gets to have sex with you, and when. Isn't that something out of a bad fantasy novel?

Even then - if you're having approved sex, for approved reasons, with an approved partner - for heaven's sake, don't talk about it. For the love of all that is holy, don't acknowledge that you LIKE it and want more of it. Those thoughts are dirty. Depraved. Sinful.

Sex-negative culture grudgingly accepts that sex is tolerable to engage in it with a spouse, in the bedroom, with the lights off, and when a baby may result.

And yet, the truth is self-evident and quite different. We all enjoy arousal. The vast majority of us enjoy sex. We like it in the bedroom. We also like it in the shower. On the kitchen counter. In motels, and the back seats of cars.

Sexuality is a natural and pervading characteristic of what it is to be a human being. Trying to shoehorn it into the confines of a pre-packaged, church-approved act of procreation, rife with guilt and self-loathing for feeling the way our bodies and brains compel us to feel, is to lie to ourselves and to others about the nature of sexuality and what it is to be human.

I, for one, believe that person's path in faith is a personal search for truth. I hope that the "investigation" being conducted by the Episcopal Diocese is a real search for truth, and not a witch hunt at the behest of a single complaint-writing individual scandalized by the depiction of naked humans having fun.

Blair is under investigation by the diocese for "immorality" and "conduct unbecoming a member of the clergy." The most extreme punishment would be removal of his ordination.

Assuming there's nothing more to the story than some sexually explicit photos of lady parts, does it warrant a defrocking?