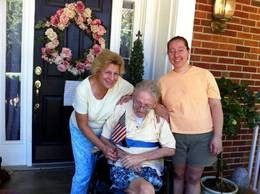 Update: The Scott Family got some good news at their hearing yesterday. From Zach Chasnoff:

The Judge ruled that if the Scott's could come up with three months rent and file a bond for that amount, which she set at $1,500, then she would order the case to be reset. Resetting the case gives the Scotts anywhere from a year to 18 months to pressure Freddie to rescind the mortgage.

Sally believes that she will be able to come up with the money for the bond by the 10 working day deadline so if nothing else the judge bought us a lot of time.

Sally Scott, a soft-spoken 65-year old, isn't one to "go out and complain about things." But that's all changed this week as Freddie Mac tries to evict her, her World War II vet husband, and their "special child" Susie--who is developmentally disabled--from their home of 12 years.

Scott says she has spent months trying to get the government-sponsored mortgage giant to work with her and a loan servicer on a loan modification but Freddie Mac hasn't been responsive to any of her inquiries about the status of her home. She says it has been impossible just to get a representative on the phone.

Going to the press--with the help of homeowner advocacy group Missourians Organizing for Reform and Empowerment--was a last ditch effort for the Scott family before a 9 a.m. eviction hearing today.

"We don't want a handout," Sally Scott said from the porch of her Creve Coeur home. "We just want a fair deal, and we want someone to actually talk to us."

Sally said she had never spoken to a representative from Freddie Mac over the phone or in person, even when they put her home into foreclosure several months ago. After refusing a loan modification approved by a HUD-certified counselor, Freddie Mac auctioned the Scotts' home back to themselves.

Zach Chasnoff, a community organizer with MORE who has been helping the Scott family, says giving homeowners the cold shoulder is pretty standard for massive mortgage enterprises like Freddie Mac and Fannie Mae.

"The banks really don't respond to homeowners themselves, but they do respond to bad publicity," Chasnoff said.

Freddie Mac didn't respond to Daily RFT's requests for comment, so we see where Scott and Chasnoff are coming from. Sally and Bob Scott purchased the one-story brick home 11 years ago and didn't have problems with the bank until five years ago when a cerebral hemorrhage left Bob wheelchair-bound and with a feeding tube. Sally says she missed a few mortgage payments as she struggled to navigate Bob's skyrocketing healthcare costs--something she was ashamed of until recently. Bob, 84, had owned a furniture store until the stroke and still receives an income from Social Security and Dept. of Veterans Affairs. 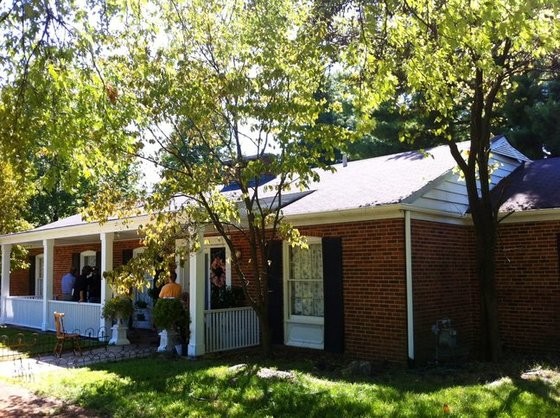 Sally turned to community groups, like MORE and Occupy the Auctions / Evictions, only after months of unreturned phone calls to Freddie Mac and fruitless research.

"This is really the first time that I've felt someone was on our side, supporting our family," Scott said of the community organizations that have been giving her advice and connecting her to other threatened homeowners.

She was put in touch with Occupy Auctions after she emailed her friends a message with the subject line "Have we lost the American Dream?"

"I had family members helping us out with this, but I didn't tell a lot of people," Sally says. "I've realized that you might have your pride but at a certain point you have to do what you can to save your home."

The Scotts and their legal counsel will ask Freddie Mac to rescind the foreclosure so that they can negotiate a loan modification with a willing loan servicer today. The hearing will be the first time any of the Scotts have spoken to a representative of their bank since they first purchased the home.

If Freddie Mac declines Sally, her husband, and their daughter could be on the streets in a few weeks. If you fancy yourself an activist-type (or not), Occupy the Eviction encourages concerned citizens to call these Freddie Mac reps to voice their support of the Scotts.