Last July, when the folks at CBS News and Vanity Fair called about 1000 adults to get their views on fluffy topics like underwear and Jesus, a plurality -- 46 percent! -- said the Gateway Arch was the "least impressive" landmark.

Let's put that another way: A miniscule proportion of our nation's grown-ups recently concluded on the phone that the Arch is not as impressive as The Alamo, Mount Rushmore, The Grand Canyon and Niagara Falls.

Uh, this is the "Least Impressive Poll" we've ever seen (and we've seen a few).

First of all, they're vague on methodology. Was this question open-ended, or was it multiple choice? Because the Space Needle in Seattle should've been a choice. We saw it two days ago. It sucks. So does Stone Mountain in Georgia (which we've never visited, but we've seen pictures, and let us spare you the Google search: It's a big rock with Confederate guys on it, whom you may remember as the losers of the Civil War). 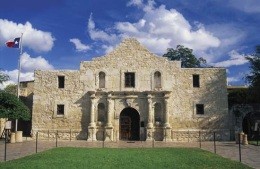 But that's another thing: Only informed adults could reliably determine which landmark is the least impressive, but that "random sample" of "adults" in the poll maybe contained respondents who weren't actually adults. Maybe they were teenagers. And teenagers are not well-informed, proven by the popularity of Taylor Swift.

For the record, the Gateway Arch is 630 feet high. That's "impressively" taller than its competitors The Alamo (33.6 feet), the Mount Rushmore heads (60 feet) AND Niagara Falls (167 feet).

You know what's under The Alamo? Nothing: It doesn't even have a basement.