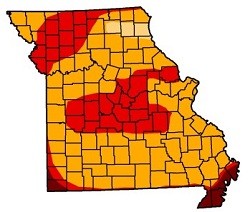 Would you look at that map over there? Look at the hotness -- or lack thereof. After weeks of that map's ever-increasing redness, the remnants of Hurricane Isaac blew through Missouri last weekend and dumped a couple of much-needed inches of rain on us.

The result? For the first time in a long time, Missouri's drought-categorization decreased in the three most-severe categories. We've still got parts of the state that are too dry -- oh, we've got dryness. But things are improving.

In the dreaded D4 classification -- "exceptional,"  the most severe drought status possible on the charts -- Missouri dropped from 35.29 percent of the state qualifying last week to merely 3.01 percent this week. Huge improvement.

But there's more room to improve. Obviously, 97.85 percent of Missouri is still experiencing severe drought. 100 percent of the state is still considered abnormally dry, and the damage has been done to the state's corn crop. It's gonna take a wetter than average summer to lift us out of the drought, but we're slowly getting better.