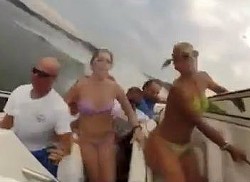 Some utterly insane footage from inside an out-of-control motor boat is going about as viral as it gets.

Brett Tintera, the cameraman, spoke to us from home where he is laid up with a broken leg and wrist, about the typhoon of attention he's received since the footage went online.

"It's pretty bizarre to me," he says. "Every news show I can think of wanted me to go out for an interview."

Tintera affixed a camera to the dashboard of the boat, then rode along with the driver (he's the guy in blue in the background). The ride was part of his job as a producer and cameraman for Lake TV.

The guy driving the 2003 Fountain Boat is Marvin F. Carter III, from Memphis, Tennessee. Tintera says he sees in the footage that Carter threw the throttle down all the way (translation for non-boat people: that's apparently a big no-no) and blasted into some waves left behind by another boat.

"This particular boat was going obscenely fast," says Tintera. "It was a normal, beautiful day down there, there weren't many weird waves. It was just driver error."

Click through to see how the original footage appeared online -- the action starts at about 1:15.

In addition to breaking a leg and a wrist, Tintera says he ruptured a disc in his back and bruised some ribs. Among other injuries sustained by the passengers Tintera counts a broken back, a couple shattered eye sockets, and hips, feet, legs and arms all snapped as the boat shook violently back and forth before coming to a halt.

Tintera's footage has been seen over 3 million times at this point. He says Anderson Cooper invited him to appear on CNN, but he's too busted up to make the trip. The story also made Good Morning America, CBS News, the New York Post and a GIF made of the moment of impact appeared on Tosh.0's blog.

"Is it me or have Budweiser ads gotten kind of violent lately?" Tosh wrote.

Though Tintera understands the voyeuristic appeal of the footage, he's not exactly laughing. He considers himself lucky to be alive.

"If anyone would have been thrown out who knows what would have happened. Probably death," he says. "I'm very lucky to be talking and able to hobble around."

Editor's note: As a matter of full disclosure, Brett Tintera is the boyfriend of an employee of the RFT marketing department.