Nasheed, no stranger to controversy, returned fire, tweeting "U R the biggest THUG in the STATE of Missouri- CLOWN!!!!!" Nasheed, who is currently running unopposed for state Senate (after a contentious primary battle), tells Daily RFT that she regrets engaging with Crowell over Twitter and isn't sure what sparked the nasty extended fight.

"That was a conversation I should not have had with Senator Crowell on Twitter," she said. "I don't know what that was all about." 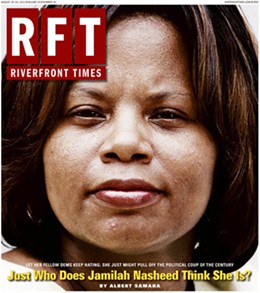 Nasheed, the subject of an August 2011 RFT feature story, climbed her way out of north St. Louis street gangs to become a community organizer and then a politician. She is one of the most controversial figures in Missouri politics--forming alliances across the aisle and torching bridges as quickly as she builds them. In his tweets, Crowell accuses Nasheed of putting her "votes for sell" and having "no principle."

"We've never had any issues outside local control. I'm the sponsor of that bill and when it got to the [State] Senate, he and some others held it up," she says, adding that even then Crowell had never been so openly hostile to her.

"I think I'm just gonna stay off of Twitter from now on," Nasheed says. "Unless you're telling people about a town hall meeting or something, it's just not productive."

Crowell, who will vacate his seat this year due to term limits, has been on Twitter a lot lately.

He seems especially taken with YouTube videos from wacky British game shows and PSY's "Gagnam Style." In an interview last week with the Southeast Missourian, Crowell said he has no intention of seeking another political office (though his name had been thrown into the mix as a possible candidate to replace the possible candidate who could replace Todd Akin).

"I'm not the senator anymore," Crowell, a newlywed, told the Southeast Missourian. "You won't hear from me anymore. I'm not hanging onto it, either. I am not defined by a title that was placed on the front of my name for a short period of time. That's not who I am. That's not what I am."

We haven't heard from Crowell yet, but Nasheed tells us she intends to apologize to the state senator for fighting his fire with fire.