Man's Silverado Is Booted, Which Impedes His Driving Only Slightly 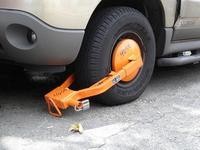 Two men told police that they clamped a boot on a Chevy Silverado last night for unpaid parking tickets, then left to get the tow truck. When the men returned, the truck -- and the boot -- were nowhere to be found.
They began a search of the area where they'd last seen the Silverado and eventually located it parked in the 3800 block of Shenandoah Avenue. The two pulled up behind the Silverado and parked. It was roughly 10:45 p.m.
At that point a suspect described by police as being a black man age 30 to 35, about 5'8'' or 5'9'' and with a heavy build, exited a building.
The suspect then hopped in his Silverado, reversed into the two men's vehicle and drove forward into a wooden fence. He was last spotted heading eastbound, and presumably, down. No serious injuries were reported for either man in the vehicle that was struck. Police continue to search for the suspect while they investigate the case.