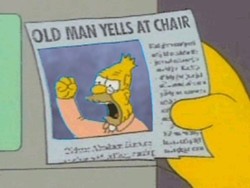 In case you ain't heard, the ultimate visual prop for any would-be national political convention these days is a piece of furniture. But not just any piece of furniture. You can't walk out there and address a dog-hair covered Barcalounger. C'mon, this is the big leagues. If you want to win over the voting public, you have to hit them with a winner. It has to be relevant, touching, empathetic and absolutely not make you look like a crazy old coot railing at a chair for eleven minutes.
With that in mind, here are our best guesses as to what object of home decor will be wheeled out onto the stage moments before President Obama delivers his "I'm accepting the nomination" speech on Thursday night. No guarantees any of these are right -- someone in our office has bet a bundle on an antebellum fainting couch purely for the "wow" factor, and they could be right -- but our journamalism senses tell us the following items are the most likely choices.

We know what you're thinking: That thing needs more eagles. But if you squint and concentrate, can't you just picture Prez O pointing a finger at this desk and demanding of it, "Mr. Romney proxy, the people deserve to know. Is this where you're hiding all your tax returns?" President Obama should stand well back when he asks that question, because the first ten rows are guaranteed to get wet. 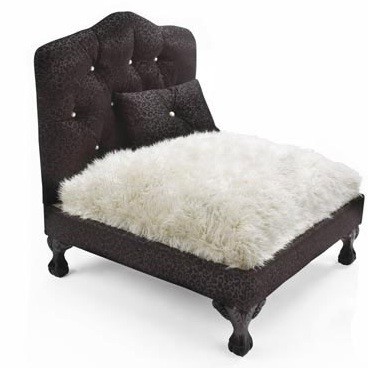 Everyone loves dogs. That's a natural fact. Obama famously promised his daughters the family could adopt one if he won in 2008, and mission accomplished (guy's gotta point out his achievements when he can). On the other side of the fence, Romney's had some trouble with a certain dog story from his past...If Obama wants to sting him again, he could resurrect that particular anecdote. Or, he could just toss off a couple of "capitalist dog" chestnuts because, hey, we all know Obama loves himself some socialism.

Who else remembers the great "You didn't build that" debate of earlier this summer? Anyone? No? Yeah, it was pretty stupid. This is a long-shot, because who wants to bring a successful foreign company into an American election, but more importantly, would you call either Obama or Romney if you were trying to assemble a the IKEA Hemnes cabinet before your wife got back from hot yoga? Hell no -- Joe Biden's the guy for that job. That dude's done some hammerin' in his time, you can tell. He'll also show up with his own beer, which is always a plus.

Charlton Heston is dead, and he'll remain that way until the great ape takeover of 2056. But Obama addressing a gun safe would be a masterstroke from a PR standpoint. True-blue Democrats will see it as a not-so-sly dig at the NRA and the hot-button issue of gun legislation -- they're simple like that. Ring a bell, they drool, to paraphrase Pavlov.

But the NRA (which actually recommends gunowners practice responsible ownership), and its supporters, will be shaken. "Do we have something in common with this guy?" they'll ask. That will be a terrifying moment of self-reflection. If Obama can establish even the briefest moment of rapport with the opposition, it will be a victory for him. It may even mark the first time anyone on the other side of the political divide has agreed with anything he's said, even if it only occurs in the privacy of their own mind.

And once he's in your head, he's won. The speech is coming from inside the house. Get out! Get out now!

Can you even contemplate what will happen to the Internet if the lights come up and Obama is standing next to Chairy? Pandemonium. Chaos. Those who are online at the time it happens will recall in later years that it was a lot like that scene in War Games when Joshua meticulously worked through all the possible outcomes of global thermonuclear war, and decided that the only way to win was not to play the game. Pinterest will become a ghost town and Twitter will become an online time capsule dedicated to memorializing the moment human beings evolved past the point where making photo memes was a legitimate means of political discourse.

Bonus Round! A totally bitchin' Camaro

This will only happens if Joe Biden is tapped to deliver the "furniture speech" on Wednesday night. Biden ain't gonna be hemmed in by your "rules" and "high-concept speechifyin'." Just give him a hot mic, a ten-minute block of national air time and his cherry wheels and he'll take care of the rest.