This Week's Feature: Did the Dybbuk Box Cause a Fire After the Filming of The Possession? 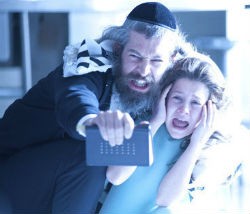 In this week's feature, Riverfront Times did what the cast and crew of the new Sam Raimi horror flick The Possession were too scared to do: We trucked out to Kirksville and visited the real dybbuk box.

The film, which opened over the long weekend (to the second-highest gross in Labor Day-weekend movie history), has only added to the lore surrounding the supposedly haunted Jewish wine box. Light bulbs on set shattered. Cold spots popped up in the middle of takes.

But one particular claim seems to have benefitted from a little embellishment from the stars of the film. Now that all the horror-junkies have probably already seen it, we thought we'd point it out.

The Possession stars Kyra Sedgwick and Jeffrey Dean Morgan, and has one of the creepiest trailers in recent history:

The stars, whilst on their publicity tour for the film, made much of the true story of the dybbuk box and how they would not allow the thing to be on set. Even Morgan, who professes to be a skeptic, seems to have really gone for broke on believing the thing is real. And why not? It's smart marketing. Here's what he told the Gawker science fiction blog i09:

I'm a skeptic, look I'm not going to lie. That being said, there was some weird goings on on set. Lots of light bulbs exploding. Just overall kind of creepiness... "Don't mock the box," was sort of the mantra that we lived by while we were filming this.

Then there's the story of the storage facility that burned down a few days after the film wrapped.

"We had all of our props, a couple days after we finished wrapping -- they put everything in storage for if you're gonna do reshoots or anything -- they keep it in storage, they need to keep it all in Vancouver," Morgan says. "It burnt to the ground. It was investigated, and there were no signs of arson, no electrical fire."

Director Ole Bornedal echoed the tale in his own interviews: "Still to this day the Vancouver Police Department doesn't know the cause of the fire."

Okay, so, yes the fire did happen -- the film's screenwriters sent us a news clip about it. And it was a super gnarly fire! Check out some footage of the blaze:

But as is clear from that news report, the cause was known immediately. Here's what Corporal Rick Skolrood of the Burnaby Royal Mounted Canadian Police said in an email:

I have just reviewed our file 2011-37817 and found that the cause of the fire was accidental. Two people who were given permission to salvage metal were using a blow torch which accidentally set the structure on fire. They attempted to put out the blaze with water but were unsuccessful and had to call the fire department. The elements of the offence of Arson by Neglect were not met and no charges were laid.

There was nothing suspicious and nothing mysterious about this fire.

He added, "Sorry I couldn't support your ghost angle."

Now, maybe we're just being no fun, but clearly our nosiness won't affect the success of the film. It was number 1 at the box office this weekend and has already raked in $21.3 million.