St. Louis Criminals Took Most of the Weekend Off, Just Like Us 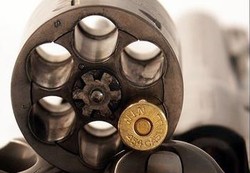 The Labor Day Weekend started off quietly on the crime front, although whether it was because of the holiday, the rainy weather or just a coincidence remains open for debate.
That all changed in a 24-hour period starting Sunday afternoon, as three shootings in that span sent three people to the hospital with injuries of varying severity.
The first incident happened at 1:20 p.m. Sunday, when a 39-year-old woman was watching TV at her home in the 3900 block of Kennerly Avenue in the Ville. She told police a random bullet hit her in the right arm while she was in an upstairs bedroom. She heard more gunfire after being shot, but fortunately wasn't hit again.
At 3:40 p.m. Sunday, a 16-year-old boy was shot in the neck while in the 2400 block of Blair Avenue in Old North St. Louis. Police believe he accidentally shot himself.
Early Monday morning, a 17-year-old man was shot in the elbow. He told police he was exiting his car in the 3200 block of Olive Street in Midtown at 12:45 a.m. when a white Pontiac Grand Prix with out-of-state plates drove by him. Someone in that car opened fire on the man, striking him at least once. He's in stable condition at an area hospital.