The $6 Beer Is Back! Warren "Red Bone" Lytle Reopens His Fairground Park Tavern 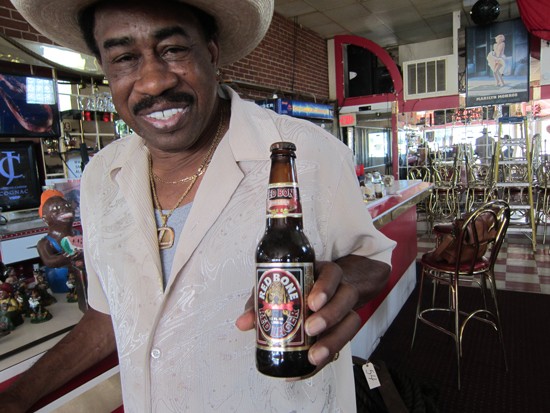 Red Bones Den, the erstwhile north-side institution known for the Chill Chamber that iced down beers to within a fraction of freezing, its lovely Bonette barmaids, cocktail waitresses and pole dancers, is erstwhile no more. The Fairground Park watering hole reopened on Saturday, August 18, after a nearly two-month closure that proved to be a mere hiatus.

As he intimated in a July 26 Riverfront Times profile, "Farewell to Red Bones Den, Home of the $6 Beer," proprietor Warren "Red Bone" Lytle was wavering in his resolve to part ways with the tavern he opened 40 years ago at the corner of Kossuth and Prairie avenues.

By the time the story went to press, he had withdrawn from a scheduled auction of his antiques collection, which decorated the barroom -- "conversation pieces" including slave shackles, an octopus-like permanent wave machine, oxen yokes and vintage racially insensitive cookie jars.

"I just couldn't find someone with the money and knowhow to take over my liquor license," says Red Bone. "And--," he pauses. "I realized I'm not ready to retire. Retirement is bad for your health. I've got the experience to keep this place running. So that's what I'm going to do, till I can't any more."

As it turned out, Lytle wound up selling most of his collection to an individual buyer. "He pretty much cleaned this place out," he says. "I'll have to start collecting all over again now."

And selling those $6 beers.

"We only started charging $6 a beer three years ago. I wish I could have charged that much all along!" Lytle rhapsodized to RFT about his high-priced beers back in July. "I didn't know it was so sweet -- the Chill Chamber, it holds 30 cases, and the beer doesn't freeze because of the aluminum bottle, even though it's set at 21 degrees. The chill and the sixteen-ounce size, that's what let me get away with charging $6 for a beer....

"Charging that much made my clientele better. Everything was just better once we started doing that. People complained and hollered and screamed -- but they bought that beer. Every time I looked down the bar at someone holding a beer, at least I knew I was getting a little back. Some people will sit all day long with one beer! You can't make any money that way."

A Bonette barmaid reached by phone this week affirms that the beers are still sold by the sixteen-ounce bottle, still cooled in the Chill Chamber and still priced at $6 a pop. "They're the coldest beers in town, baby!" she assures. "They're worth it."

Red Bones Den is open for business six days a week, Monday through Saturday, from 5 p.m. till 1:30 a.m.