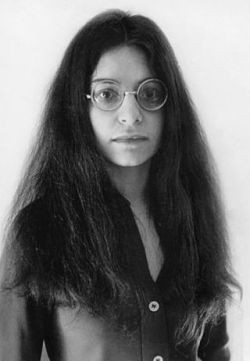 Shulamith Firestone, a painter and writer whose 1970 book The Dialectic of Sex: The Case for Feminist Revolution was one of the seminal books of second-wave feminism, was found dead in her apartment in New York's East Village this past Tuesday. She was 67.

Born into an Orthodox Jewish family in Ottawa, Canada, Firestone and her five brothers and sisters were raised in Kansas City and University City. Firestone attended Washington University before moving to Chicago to finish her education at the School of the Art Institute of Chicago.

While still in her early twenties, Firestone helped found several radical feminist groups in Chicago and then in New York, including (with future Village Voice critic Ellen Willis) Redstockings, which ran consciousness-raising groups, taught self-defense classes and advocated for abortion rights. The manifestos she had written for those groups eventually became The Dialectic of Sex, which was published when she was only 25 and cemented her reputation as an important voice in the women's revolution.

Drawing on Marxist theory, Firestone argued that women were oppressed by childbearing and that the only way to end gender inequality was not only to eliminate male privilege (higher pay for equal work, etc.), but to eliminate all gender distinctions as well.

So that just as to assure elimination of economic classes requires the revolt of the underclass (the proletariat) and, in a temporary dictatorship, their seizure of the means of production, so to assure the elimination of sexual classes requires the revolt of the underclass (women) and the seizure of control of reproduction: not only the full restoration to women of ownership of their own bodies, but also their (temporary) seizure of control of human fertility - the new population biology as well as all the social institutions of child-bearing and child-rearing.

In Firestone's radical vision of the new world order, all conception would take place via artificial insemination and fetuses would grow in external artificial wombs. The nuclear family would be dissolved and, instead, people would live in "community units." In order to preserve this perfect equality, everyone would remain celibate.

The Dialectic of Sex was both praised and ridiculed, though, as Emily Chertoff wrote in her obituary in The Atlantic, some of Firestone's ideas still have currency today:

When parents choose to raise their children gender-neutral, a lot of that's Firestone. When we hail advances in artificial reproduction, we're seeing developments that Firestone championed decades ago. When writers theorize about the end of men, they're tearing whole pages out of Firestone's book.

As for Firestone herself, she was unprepared for the fame and notoriety The Dialectic of Sex brought her. She had also begun to show signs of the schizophrenia that would keep her moving in and out of psychiatric hospitals in the eighties and nineties. She lived a quiet, reclusive life, painting and writing; the only other book she ever published was Airless Spaces, an account of a hospitalization in the eighties. She had been dead for a week by the time a neighbor found her body.

She is survived by her mother, two sisters and two brothers.