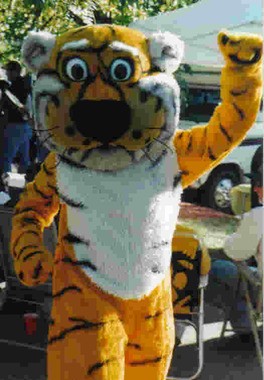 The Missouri Tigers will open their 2012 season Saturday evening, hosting Southeastern Louisiana in Columbia. (Always exciting to open the season with such a tough opponent.) While I personally won't be plunking down any of my hard earned money for the opportunity to see the Tigers play what should be a cupcake game on pay-per-view, I just might make my way to some local drinking establishment willing to do so in my stead. (I considered making the trek to Faurot Field, but time is not on my side this weekend, unfortunately.)
I have to admit to being more excited for the opening of this Mizzou football season than I think I can ever recall being before. Given the rather remarkable run the Tigers have been on the last six or seven years, in terms of on-field success, every season brings with it plenty of reason for optimism and excitement. This year, though, there's cause for even more of a buzz.
Just how Missouri fares as part of the monstrous Southeastern Conference, the 600-pound gorilla of college football, remains to be seen. But I can't say I'm not geeked to see just how it goes.
The Tigers have a good team this year. Or, at least, they should. Plenty of returning talent, including a dynamic quarterback still developing as a passer, and a crop of incoming players who rank among the best in all of college football. Mizzou should have more than enough talent to compete with any team, in any conference, at any time.
That being said, there are a handful of players whose performances could very well make or break the Tigers' season. In the interest of brevity, I'm going to stop yakking and just give you the list. Deal?
#5 -- E.J. Gaines, Defensive Back

A year ago, Gaines won All-Big XII honors in his first season playing full time as a sophomore. Now, as a junior, E.J. should be in a position to have a huge year.
Interestingly enough, of all the players on this list, Gaines may be the one who really benefits from the move to the SEC, rather than being challenged to excess. He will be facing the absolute cream of the crop as far as athletes goes, of course, defending the top receiver of every opponent, but no longer will he have to contend with the aerial assaults of the Big XII schools. No more Oklahoma State or Texas Tech firing the ball around 50+ times a game.
That's not to say there won't be challenges. While there are few SEC schools who light up the passing game the way Big XII schools do, with most utilizing a much more balanced attack, that does mean the Mizzou secondary will be pushed to perform more in run support. How well E.J. Gaines, as well as the rest of the Missouri defensive backs, adjusts to a different style of offense in the new conference will go a long way toward determining how successful the Tigers are at holding the opposition in check.#4 -- Sheldon Richardson, Defensive Tackle

Richardson, the former St. Louis high school star turned California juco transfer to Mizzou, has as much ability as any player on the field for the Tigers. He played well for the Tigers last season, racking up solid but not extraordinary tackle numbers in his first year of major conference play.

A redshirt junior this season, Richardson should be poised to take off. The Missouri coaching staff, Gary Pinkel in particular, has put a lot of time into Sheldon Richardson, from the time spent recruiting him out of high school to getting him in at College of the Sequoias in California, all the way through the needless drama of him decommitting to Mizzou and flirting with USC two years ago. It's time Richardson made all that effort, and the faith Pinkel and his staff showed in this young man, pay off for the program.

You don't often expect a true freshman to come in and make an impact at any position, never mind one with so much to learn as a wide receiver in a complex offense like the spread of the Tigers. However, Dorial Green-Beckham is the kind of player from whom you maybe don't simply expect the ordinary.

He was the number one recruit in the nation, wooed by programs near and far, and decided to stay close to home in Springfield by coming to Mizzou. In doing so, he immediately gives the Tigers the kind of all-around receiving threat they haven't had in, well, I don't really know how to finish that sentence. Danario Alexander is the closest thing Missouri has had to a player with Green-Beckham's level of talent at receiver, and Alexander's well-documented injury troubles too often obscured the extent of his abilities.

Quite possibly the best thing about the situation for the Tigers and Green-Beckham both is that he won't be expected to step in and immediately become the number one guy. L'Damian Washington emerged last year as a big-time talent in the Mizzou receiving corps, and T.J. Moe will bring his stellar hands and surprising elusiveness back for another season. That's not the extent of the depth chart, either, but it does give the Tigers at least two true threats for James Franklin to throw to, taking the pressure off Green-Beckham to be The Man right off the bat. Nonetheless, I think we should all expect to see some special things from this young man, and likely sooner than later.#2 -- James Franklin, Quarterback

It's probably a little cliched -- not to mention obvious -- to list the quarterback as a player to watch, particularly in an offense like Missouri's. However, Franklin is so vital, so central, to the Tiger attack, that the entire season may very well hinge on his progression as a quarterback.

So what are the chances of Franklin taking the step forward he needs to take for the Missouri offense to remain elite against the likes of the SEC? It's tough to say, really, but the presence of an extremely deep and talented wide receiver group certainly can't hurt. I've said for a long time I don't believe Franklin has the kind of pure arm strength necessary to ever become a really elite pocket passer, and I still believe that. He has more than enough arm to throw the ball down the field, but fitting it into the tightest of windows may always be just a bit beyond his ability. All the same, I thought he improved significantly as the 2011 season went on, and I was impressed with his play in some very big spots last year.

That being said, Franklin is also a dual-threat kind of quarterback, one who does just as much, if not more, damage with his legs as he does his arm. It has to be a point of concern for Pinkel and Co., the kind of risks Franklin may be taking in trying to run against the speedy, physical defenses of the SEC, but in order to win that's the chance they're all going to have to take. Franklin is going to have to continue with his Tim Tebow Lite impression for the Tiger offense to take off this season. If he can't do so, or if he fails to take a step forward as a passer of the football, the Tigers may stall out

Okay, so it's sort of cheating, I suppose, to write a column about five important players then throw a whole group of guys in there together under one heading. Nonetheless, I don't think there is any single aspect of this year's team that will be more sorely tested than the offensive line, and I can't pull just one guy out of that group to highlight.

We all know the speed and athleticism in the SEC is just off the charts, and nowhere is that more evident than in the defenses the Tigers will face. Teams like Alabama and LSU feature pass rushes the likes of which Mizzou never faced in the Big XII, and while James Franklin's elusiveness and ability to break contain will help, the fact is the offensive line is going to have to step up its play in order to keep Franklin on his feet and fully ambulatory.

The good news is that the Tigers have a very talented, very capable group, bolstered by the arrival of the ultra-talented Evan Boehm, a guard out of Lee's Summit, Missouri who ranked as the number two recruit in the state of Missouri, right behind his new teammate Green-Beckham.Honorable Mentions

For this list, I also considered tailback Greg White, a redshirt sophomore who has seen limited opportunity in his time so far at Mizzou. With the future of Henry Josey, who emerged last season as one of the most dangerous running backs in the country before suffering a gruesome knee injury, still largely up in the air, I think the time is now for White to get his shot. He won't be the featured back this season; senior Kendial Lawrence will likely get first crack at pulling the lion's share of carries. But White has the kind of size (6'1", 215), that the other Tiger backs largely lack, and he has plus speed as well. In the end, I couldn't justify a list spot for a running back listed fourth on the depth chart, but if you're looking for a sleeper who I think could make an impact before it's all said and done this season, White is the guy.

You may notice most of my questions centered on the offensive side of the ball. That's because, as much of an offensive powerhouse as the Tigers have been, I believe their defense is actually more ready for the transition to the SEC. Sure, there are plenty of good offenses to be found in the conference, but none that are head and shoulders above anything the Tigers have seen before in the Big XII.

The defenses of the Southeast, on the other hand, are on an entirely different level. The offense is going to have to contend with a level of speed and physicality they've never experienced before. That's why, despite the relative qualities of offense and defense for Mizzou, I think it's the scoring portion of the team that's going to have to take a big step forward for the Tigers to have a successful season in 2012.

In the end, I think Mizzou will be just fine this year. There will be some struggles to be had, I'm sure, but this is a big-time college program with elite talent. Going from the Big XII to the gauntlet of the SEC will require the players to step up their games, but luckily the Tigers have players capable of doing so. Are they good enough to go head-to-head with Alabama or LSU yet? No, probably not. But they're certainly good enough to compete week in and week out. And really, that's all you can ask.