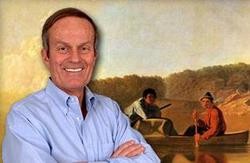 Update: Akin's peeps are not amused.

In a rare exception to super PAC fundraising rules, a journalist from Businessweek was allowed into a seminar lead by Karl Rove, the former deputy chief of staff and George W. Bush's senior policy advisor.

According to author Sheelah Kolhatkar, Rove showed off some of his trademark campaign ruthlessness in far more literal terms when discussing Rep. Todd Akin and the "legitimate rape" comment heard 'round the world.

"We should sink Todd Akin," he said. "If he's found mysteriously murdered, don't look for my whereabouts!"

Rove made the remarks at a fundraiser at the Tampa Club for his super PAC American Crossroads on the final day of the Republican National Convention. Kolhatkar writes that about 70 high-powered and deep-pocketed GOP donors were in attendance as Rove explained the campaign strategy behind the Romney-Ryan ticket.

Naturally Rove was "joking" about drowning and murdering Akin, but he's not the first person to fantasize about killing the congressman.

Rove also outlined, in more blunt terms than the public is usually privy to, just how bad the Republican powers-that-be want Akin to drop out of the race:

There are six Republican incumbents Rove identified as in jeopardy, but the biggest risk to Republican hopes of retaking the Senate is Todd Akin in Missouri, following his comments about "legitimate rape." Rove urged every attendee to apply pressure on Akin to convince him to leave the race. "We have five people who are interested" in replacing Akin, Rove said. "We don't care who the nominee is, other than get Akin out."

Update: According to Politico's Dave Catanese (who is apparently back on the beat after getting wrist-slapped by his bosses), Akin's spokespeople are not laughing: