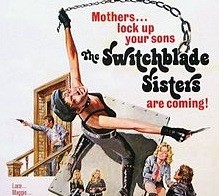 St. Louis police responding to a shooting yesterday afternoon in the 4400 block of Labadie in north St. Louis heard a hell of a tale.

The victim, a 28-year-old man, told authorities that a female friend arrived on the scene in a car with two of her girlfriends and began arguing with him. The 21-year-old female acquaintance soon exited the vehicle with a crowbar in hand while another young woman in her late teens or early 20s brandished a knife. The man claims his friend soon clobbered him with the crowbar.

The two struggled for a moment, and then the second woman jumped in and stabbed him in the hand. The three women broke off the attack and returned to their car, while the man pursued them. He allegedly got close enough to the passenger side to see that his friend now had a silver revolver in hand; she fired two shots at him, and he took off running. The ladies fled the scene in the car, according to the victim.

Police say the man refused medical treatment for his injuries. No suspects are in custody at this time, but one wonders:

Is it? Could it be? Have the Jezebels descended on St. Louis?