Meet the New UM Press, Same as the Old UM Press, Sort Of [UPDATED With Comments From Clair Willcox and the Save the UM Press Facebook Page Organizers and News of Speer Morgan]

Updated August 29 with comments from Ned Stuckey-French and Clair Willcox and news about Speer Morgan's "leadership role" at the end of this post.

The only major change is that the UM system will be transferring control of the Press to the Mizzou campus immediately instead of waiting till the end of the fiscal year (June, 2013) as previously planned. Now Mizzou will assume financial responsibility for the Press and subsidize any costs of running it that aren't covered by the sales of books.

The university is also doing its best to mend fences with Press employees. With the notable exception of Clair Willcox, the former editor-in-chief who was laid off in July, everybody who was at the Press in May, at the time of the first announcement, is still working there. UM and Mizzou officials met with the staff this morning and told them they would be allowed to stay in their current positions. Of the nine employees, Banken says, two have already found new jobs within the UM system and will be moving on. Willcox won't be coming back, either; Banken says he's also found a new job. [For clarification from Willcox, see the updates at the end of this post.]

For the time being, Dwight Browne, and not Morgan, will remain the interim director of the Press, and the Press will remain in its current offices in a Columbia business park instead of moving to the Mizzou campus to share space with the Missouri Review.

As for Morgan's original plan to replace the professional staff with cheap labor in the form of graduate student interns, Banken says reports were highly exaggerated. "There will still be a professional full-time staff," she says. "The interns will be working for the Press the way students work for KOMU and the Missourian [Mizzou's TV station and newspaper] or like science students work in labs. It will be a laboratory for highly-skilled students, mostly graduate students, but some undergrad, who are interested in working for presses."

The one prospect of a Morgan regime that most terrified academics, the abolition of peer review of scholarly books, will also not come to pass. (For the record, Morgan never actually opposed peer review and had always promised it would continue. However, Ben George, director of Lookout Books, a literary press affiliated with the University of North Carolina-Wilmington, whom UM paid to be a consultant on plans for the new Press, had advised against it.)

"Going forward, we envision that the Press will publish not less -- but more -- scholarly work," Deaton said in a statement this morning. "A viable, fully functioning Press is essential to a major AAU university. The Press will continue to publish hard-copy books while adding a more broad-based and longer-term approach to scholarly publishing while preserving the identity of the original Press."

In other words, things will continue as they have been, until the university and its new advisory board, which Banken says should start meeting within a few weeks, figures out a new plan.

But what of the 50 authors who wrote to the Press to demand that the copyrights to their books revert back to them so they could take their work elsewhere, to other academic presses that care -- or at least give the appearance of caring -- more about serious scholarship?

"The Press never reverted rights," says Banken. "We'll be talking to individual writers and telling them to be patient, that the Press is still in transition." As for the series editors (who are academics, not full-time Press employees) who resigned their positions, Banken feels "almost sure" that the Press will be having discussions with them as well.

Meanwhile, work continues on the books that were scheduled to be published in the early part of 2013. "The Press never stopped publishing," says Banken. "It's not stagnant. It will continue to do what it's been doing." 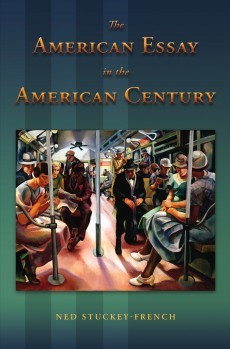 Update: The Save the University of Missouri Press Facebook organizers called yesterday's announcement "A TREMENDOUS VICTORY! A PYRRHIC VICTORY!" One of the page's organizers, Ned Stuckey-French, the director of the program of publishing and editing at Florida State University and author of The American Essay in the American Century, published by UM Press last year, wrote Daily RFT an e-mail to explain:

This is a victory because nine people were told they aren't going to be out on the street in an uncertain economy, but it is bittersweet, because unfortunately the administration did not hear the thousands of people who protested this decision all summer. The administration has waited too long and mis-stepped too often.   They can reverse their decision, but they can't reverse history.   They've destroyed the Press.

The Press's reputation, Stuckey-French adds, has been terribly damaged by the events of the summer and, despite Banken's assertions that the staff has continued to work amid the turmoil, the Press has no list for fall 2013. "No one wants to submit a manuscript that has taken years to write to this mess of a press," he explains. "Even if they can rebuild this press in years to come, there will be a long hiatus -- years. Who wants to be associated with it now?" In a follow-up phone call, Stuckey-French said he'd discussed the matter of rights with Deborah Noble-Triplett, UM's assistant vice president for academic affairs, and had received no definitive answers. In the wake of yesterday's announcement, which didn't mention the subject of rights at all, he sent a mass e-mail to the 50 authors who had demanded their rights back and has heard back from a few.

"They still want their rights back," he reports. "They're very loyal to Clair [Willcox]. He's the editor they worked with. They went to Missouri because of him. They all see this [the announcement] as games. If they just offered Clair the job back, I think the authors would be satisfied."

He concludes: "The only thing that is making any money is the backlist. It makes $700,000 a year and this is a cynical ploy to keep the backlist, nothing more."

Update 2: Clair Willcox would like to clarify that he does not, in fact, have a new job yet, though there have been offers, both in Columbia and from other university presses, which would require relocating. He's still weighing his options.

Would he reclaim his post as editor-in-chief at UM Press if it was offered? 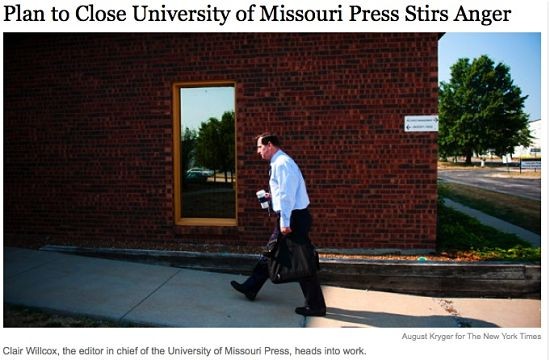 "That's all speculative," he says. "I don't think it would happen, especially if Speer Morgan stays on in a leadership role. It's not practical."

Willcox would also like to clarify that, while he was editor-in-chief, the Press was not losing money, it was embracing electronic publishing and it had an active student internship program (though it was suspended this summer because of all the turmoil) -- all conditions the "new" Press was supposed to remedy.

Meanwhile, Willcox has been in contact with his former staff. Of the nine whose layoffs have been rescinded, two have found new jobs (one at the Mizzou library, one at the state historical society), one will be leaving Friday as originally planned, one will leave in October, and one is Dwight Browne, who remains the interim director, a position he has held for the past four years. The remaining four are still undecided.

But Willcox notes that two of the staffers who decided to leave permanently are John Brenner, who was the acquisitions editor, and Sara Davis, the managing editor. Along with Willcox, they made up the entire editorial staff.

"In my conception of a press," Willcox says, "the most important thing, to my mind, is the editorial staff. They acquire the books, they develop the books, they see that the content is good. What do they have left now?"

Update 3: Speer Morgan's to-be-determined "leadership role" at the new-new-model Press has evaporated, reports Janese Silvey at the Columbia Tribune. Mary Jo Banken told Silvey she was mistaken about Morgan's role at the Press. Instead, says Silvey, Morgan will be part of "a Mizzou Advantage initiative that focuses on new technologies."

The full statement from the Mizzou News Bureau:

Speer will not be involved in the operation or management of the Press. He will continue to direct The Missouri Review, and he will have a leadership role in our Media of the Future Program, which is focused on the impacts of rapidly changing technology on the ways in which we share and preserve information.

This is way more excitement than should ever be allowed at a university press.