[VIDEO] Is a Radio Host in the Ozarks Torturing Coyotes on Camera?

Caution, dog-lovers! The clip below might be uncomfortable for you to watch, because coyotes resemble pet dogs -- ugly ones, no doubt, but dogs all the same.

In fact, the radio host doing the trapping -- Brad Harris of the Christian station KNEO 91.7 FM in southwest Missouri -- even refers to the coyotes "dogs." (More on him in a second).


This was uploaded yesterday on YouTube, but looks like it was filmed during the last coyote hunting/trapping season, which lasted through last winter.

It appears from Harris' comments in this video (and in others) that he's trapping the animals for their fur, which is perfectly legal and a traditional activity. But what struck us in this video was that Harris approaches the ensnared animals while they're still alive (and clearly freaked out) and talks about them to the camera before he shoots them -- and he surely will shoot the ones with nice coats; that's the whole point.

This seems like a violation of the "clean kill" ethic -- the notion that a hunter should kill prey as cleanly and quickly as possible in order to prevent trauma on their part. (For more on this subject, see our 2011 feature on celebrity waterfowl hunter, Jeff Foiles).  Videotaping them in states of distress doesn't seem like it conforms.

That said, farmers and rural folks tend to hold coyotes in much lower esteem than other game animals, like deer, for instance. They view coyotes the same way that city-dwellers view roaches and mice -- i.e., as pests to be wiped out (because they can harm livestock and wild game). 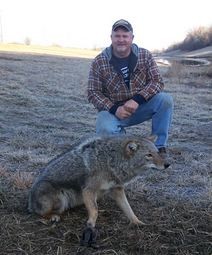 While Harris is a widely-known guide and hunting personality (he hosted a show on the Outdoor Channel), he doesn't style himself as a blood-lusting Ted-Nugent-style wildman. According to his own website,


Brad's love for the outdoors is not driven by business or public exposure. It is deeply rooted in heritage and tradition that has been passed down to him through generations of hunters in his family.

Since 1996, he's been co-host of the "Christian Sportsman" radio show on KNEO down in Neosho. It's a now a national broadcast that "merge[s] Christian messages with outdoor tips and tricks."

Daily RFT isn't sure what to think. No one really objects object when, on fishing shows, a dude holds up a flopping, newly-hooked bass to the camera. It's been caught, and it can't breathe - but that doesn't bother us.

Could it be that Harris' coyote videos only seem different because the animals resemble Fido?