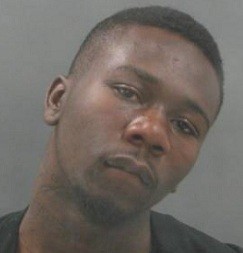 Terrell Holley, 17, is allegedly one of the hardest-working teens in St. Louis. While most of us the city slept Sunday night, Holley was purportedly committing a one-man crime wave that stretched from downtown to the Central West End to South Hampton and finally ended in Goodfellow Terrace.

Holley's evening of larceny allegedly began at 1:15 p.m. near Eighth and Walnut streets, when he held up two women in a black Jeep. Police say Holley ordered them out of the Jeep but to leave a purse in the vehicle, and threatened to shoot them if they didn't comply. Considering recent crimes in town, the women obeyed. Holley than allegedly took off in the Jeep.

Police say Holley next struck in the 4900 block of Buckingham Court in the Central West End near 2:45 a.m., when he drove slowly by a woman who was out walking. Holley allegedly jumped out of the Jeep, demanded the woman's backpack and cell phone, and fled once again in the vehicle.Shortly after this incident, he purportedly approached a trio of men in parking lot in the 4900 block of Laclede Avenue still in the CWE. He exited the Jeep, told them he had a gun and ordered them to freeze. Instead, the men bolted. Police say Holley also fled.

He reappeared in South Hampton at 3:15 a.m., when he accosted a pair of men who had just exited a cab in the 5100 block of Winona Avenue. Police say Holley indicated he was armed and ordered the men on to the ground. The two complied, and Holley allegedly stole their cell phones, a debit card and a wallet and keys before once again fleeing in the Jeep.

Roughly an hour later, close to 5 a.m., Holley was spotted filling up the tank of the Jeep in the 4700 block of Bircher Avenue in Goodfellow Terrace. Unfortunately for Holley, his observer was the keen-eyed Officer Sarah Mesnage of the SLMPD. Officer Mesnage says she made eye contact with Holley, who jumped in the Jeep and fled as usual -- this time, however, he forgot to remove the gas nozzle from the Jeep's tank, ripping it off the pump.

That's suspicious behavior, even in St. Louis, so Officer Mesnage gave chase. Eventually Holley ditched the vehicle and fled on foot, a pursuit that ended with Holley being apprehended by Officer Mesnage and Sgt. Keenan Richardson.

Holley was identified as the man who robbed them (or attempted to, in one case) by the victims, and police say he admitted it was he in all incidents. He's been charged with three counts of first-degree robbery, three counts of attempted robbery, one count each of property damage and armed criminal action, and one count of resisting arrest.  Amazingly, there were no reported injuries in all this, except for the gas pump. He's currently being held on a $150,000 cash-only bail.