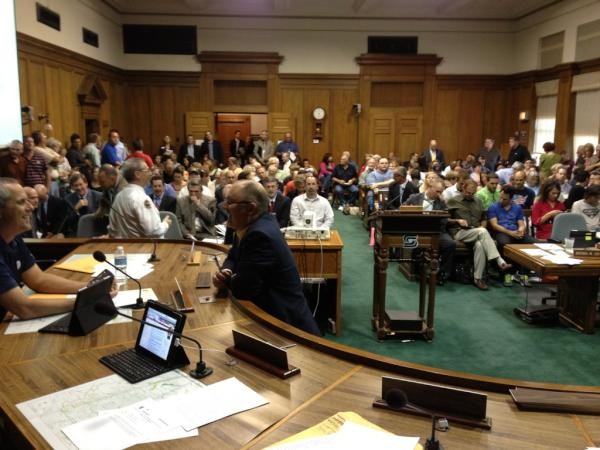 The Springfield City Council had an agenda chock full of social justice issues last night and a city hall filled with citizens dying to weigh in.

The items before them would decriminalize small amounts of marijuana possession and add sexual orientation and gender identity to the city's nondiscrimination ordinance.

Apparently, the good people of Springfield would be way more comfortable with one of their citizens being caught with a small amount of kush than identify as gay. While the nondiscrimination ordinance was tabled last night pending further discussion, the pot decriminalization bill passed (with some major caveats).

The pot decriminalization ordinance started out as a petition campaign from Show-Me Cannabis. Organizers gathered enough signatures to get the bill sent to the city council, but didn't expect them to pass it. From there, the law -- which penalizes smokers caught with 35 grams of herb or less with tickets and a maximum fine of $150 instead of arrest -- would've gone before voters on the November ballot. The crime would be reduced to a municipal infraction, as opposed to a misdemeanor.

Instead, the city council passed the ordinance 6-3. Member commented that it was better to pass it in council rather than stick the citizens of Springfield with the estimated $180,000 price of putting the measure on the ballot. It also means that they'll be free, in the next 30 days, to change things about the measure they don' t like. That could be as minor as tweaking some language or as major as totally neutering the bill's intent.

Council member Tom Bieker, who previously voiced support for the bill, says he hopes the council irons out some of the legal concerns that would put the ordinance in direct conflict with state law.

"That kind of puts you between a social rock and a hard place," he said this morning. "You can say, 'I don't care if someone smokes a joint,' but it's still state law."

While that still leaves a lot of unanswered questions on how the new law will actually work (or not work), there's a lot more up in the air with the nondiscrimination ordinance.

Before Bieker moved to "table" the bill for now, 150 people signed up to speak before the council's vote. The rest of the council ultimately agreed 7-2 with Bieker that a task force needed time to consider the measure more carefully before putting the issue to a public vote.

"This issue has really polarized Springfield," Bieker says of his motion to forestall the decision. "We'll try to craft something eveyrone gets a little on and we can move forward as a community."