With fewer than 24 hours until its shirtless rally in Columbia yesterday, GoTopless.org put out something of a distress call on Facebook. The organization, fronted by a religious group that believes in UFOs and stresses sexual freedoms, was still in need of someone to read a prepared speech at its Missouri protest -- one of a handful of similar demonstrations occurring nationwide Sunday. By early yesterday afternoon, GoTopless.org found that person. Though it wasn't who you might think.

"I was simply asked [to read the statement], and I totally agree with it," said Jeffrey Frey, a Columbia man who, like other male participants, wore shorts and a bra for the 1 p.m. rally.


The 12-minute speech reflected heavily on the Nineteenth Amendment, ratified 92 years ago this month, that gave U.S. women the right to vote. It's the hope of GoTopless.org that women everywhere will be able to publicly display their nude torsos by the time the amendment celebrates its centennial anniversary. (The group chose to demonstrate in Columbia after learning that the city had no ordinance specifically prohibiting females from going topless.)

More than half of the thirty or so protestors who bared their chests yesterday were men -- much to the disappointment of dozens of male onlookers who showed up to witness the spectacle at Columbia's Peace Park near the University of Missouri campus. (None of those male gawkers, btw, wanted to give their names when interviewed for this story.)

One of the first women to shed her top was Donna Gabriel, who drove in from out of town to attend the protest. 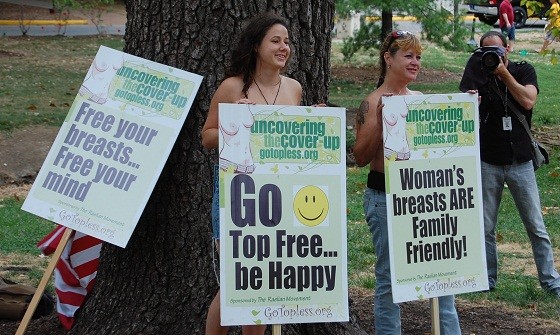 "I'm not embarrassed of my body," said Gabriel, wearing only a pair of jeans and shoes throughout much of yesterday's demonstration. "If men can go topless, women should be able to."

Following the speech, the protestors marched through the streets of downtown Columbia garnering double-takes from motorists and passersby, many of whom whipped out their smartphones to snap a photo. A downpour -- the first measurable rain in weeks -- did little to dampen the enthusiasm of the protestors as they marched and sang: "Hip hip, ho ho, the war on women has got to go," and "the breast, united, will never be defeated."

Editor's note: Click to Page 2 for additional photos from the protest. But a word of warning: They're not safe for work and cannot be unseen. 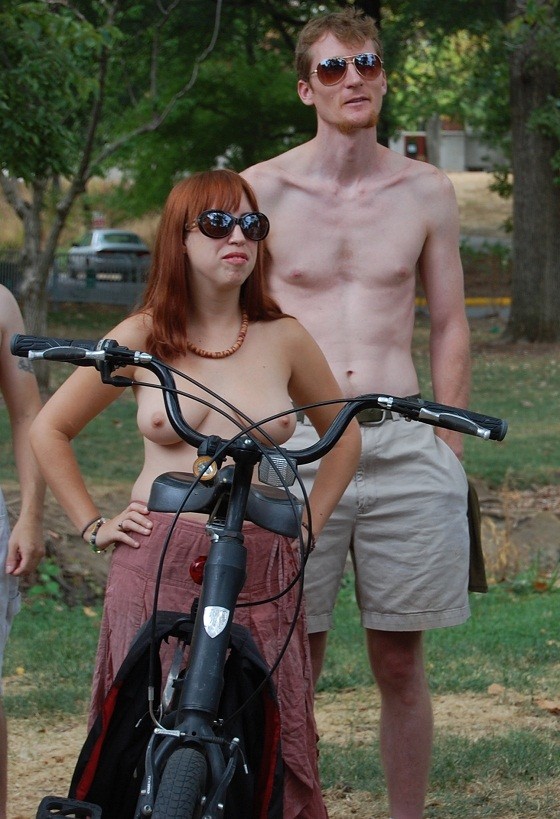 Hunter Woodall is an undergraduate studying journalism and history at the University of Missouri. Follow him @huntermw

Follow That Story Gettin' All Religious Up in Here Sex