Highway 70 Drive-By Ends in Crash at Tucker and Pine 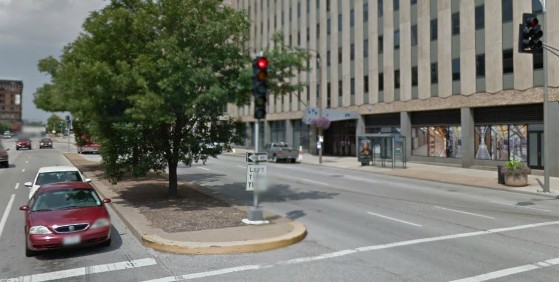 An unidentified man escaped serious injury after being hunted by gunmen on I-70 Sunday night. The driver, a 23-year-old black man, told police that he was driving near Kingshighway and West Florissant Avenue just after midnight when noticed he was being followed by a blue Dodge Charger.

He entered I-70 eastbound and saw the Charger was still tailing him. At the Salisbury Street exit, the Charger's passenger leaned out the window with a revolver and opened fire, at which point the victim went into evasive maneuvers. He exited the interstate at Memorial Drive, hoping to lose his pursuer.
He couldn't shake the Charger, however, and it chased him west on Pine Street, eventually forcing him into the median at Tucker Boulevard and Pine. The Charger continued westbound after causing the accident.

Police continue to investigate the assault this morning.