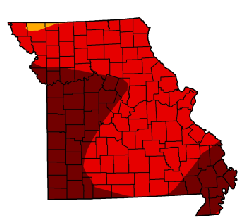 Man, this summer is never going to end, is it? Past history indicates that it will eventually, but that's feeling like less of a certainty here in Missouri. Especially after a look at the latest U.S. Drought Monitor weekly report.

The spate of cooler weather and actual rain offered relief through much of the Midwest region. Southern Wisconsin, Illinois, Indiana, Kentucky and Ohio all saw the severity of the drought decrease --  but not here in Missouri. No, never in Missouri.

As the USDM notes in the report, "Exceptional (D4) and Extreme (D3) Drought continue to expand in the area from northern Missouri and into Kansas and Nebraska where beneficial precipitation has been hard to come by."

Tell me about it.

Numbers-wise, that means the percentage of the state that qualifies as D3-D4 drought jumped up from 94.68 to 99.29. That's a big bump for one week. Missouri's actual D4 drought percentage also creeped up to 35.72 percent from last week's 35.51 percent. It should go without saying that Missouri had no improvement in any drought categories. None.

As we go deeper into this summer, the USDM weekly drought report is starting to feel more like a drought lament, isn't it?