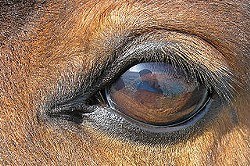 Something weird was happening in a barn in Taney County, Missouri, just south of Springfield. Dee Dee Ulrich told the Springfield News-Leader that she returned from vacation to find her barrel-racing horses with open slash wounds, some of them 18 inches long. They also showed signs of having been ridden hard and recklessly.

So she staked out the barn to find out who -- or what -- was abusing her horses.

Just after 11 p.m. on August 4, she saw four people trespassing, and quickly called police. Deputies arrived and most of the trespassers scattered; one of them stayed behind to speak with Ulrich and the officer.

The man, later identified as Chad Smith, 28, told them he and the folks who'd run off had been hired to work with the horses. Overnight.

Oh, and the deputy noted that Smith had a machete in hand while he was telling his story. Ulrich denied that anybody had been hired to work with her horses -- especially machete-wielding people. Smith allegedly told them he only brought the machete along for protection. From the mountain lions, you see.

No one was arrested that night, but the Taney County Sheriff's Office continued to investigate the case. On Tuesday of this week, Smith was charged with first-degree burglary in the incident. Also charged were Antwon Brown, 18; Amber Haskins, 18; and Chris Miles, 18, who were purportedly the runners on the night Ulrich called police.