Too Much Water Leads to Red Lobster Fracas? 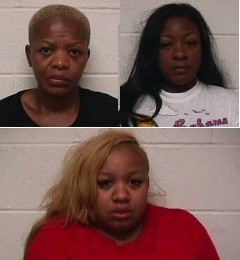 A trio of women were arrested after allegedly attacking their waitress at the Fairview Heights Red Lobster last Friday afternoon. Sharrel Evans, 21, Britley Green, 22, and Geneen Green, 44, have each been charged with one count of mob action and one count of assault. They're being held on individual $50,000 bonds.

What could possibly go so wrong at a Red Lobster that you'd need to issue a beating to your server?

According to witnesses, the ladies became irate after their waitress filled their water glasses too frequently.

One of the trio responded to the insult of attentive service by hucking a recently-filled glass at the waitress as she walked away from the table, hitting her in the head.

When the server turned around to see what happened, she was battered in the face with the dessert book.

It's worth noting that this same Red Lobster had a wait staff assault last December. The reason for that one? The angry diners weren't happy with the service.