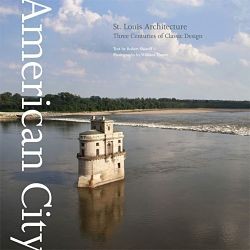 It's a good week for St. Louisans on the local bestseller list. Not because Fifty Shades of Grey is back on top (though should we be grateful that it's set in Seattle and not here? -- and please, please, Gone Girl, dethrone it soon because you are just that awesome), but because there are three local-centric titles on the adult list, plus Count To Sleep St. Louis and Amy E. Sklansky's Out of This World over on the kids' list.

At number four on the adult list is the triumphant return of James W. Erwin's Guerrillas in Civil War Missouri. And at number six is the debut of American City: St. Louis Architecture: Three Centuries of Design, with text by architecture critic Robert Sharoff and photos by William Zbaren. (The architecture junkies among you may remember that these photos were part of an exhibit at MOBot last summer.) And finally, at number ten is St. Charles: Les Petites Côtes, another entry in the Images of America Series, written by Dianna and Don Graveman. Les Petites Côtes was apparently the original name for St. Chuck; it means "the little hills."

And, finally, the presence of The American Heiress by Daisy Goodwin at number five (it's about the eponymous heiress, named Cora, who marries a British lord) can only be a sign that a lot of you are really missing Downton Abbey.

1. The Secret of the Fortune Wookiee by Tom Angleberger 2. Insurgent by Veronica Roth 3. Count to Sleep St. Louis by Adam Gamble and Joe Veno 4. Nevermore: The Final Maximum Ride Adventure by James Patterson 5. Press Here by Hervé Tullet 6. Number the Stars by Lois Lowry 7. Out of This World: Poems and Facts About Space by Amy E. Sklansky and Stacey Schuett 8. Where the Wild Things Are by Maurice Sendak 9. The Giving Tree by Shel Silverstein 10. Oggie Cooder by Sarah Weeks