When last we heard from the the St. Louis Convention and Visitors Commission and the St. Louis Rams, the two sides were heading to arbitration over the required-by-lease changes to the Edward Jones Dome. Today, the CVC issued a newly-revised proposal to the team,  "In response to concerns raised in the Rams' alternative plan and in subsequent discussions." That revised plan is available online here.

The new plan is a 128-page document rife with technical specifications, pictures of proposed fabric swatches for the new seats in the club zone and seating layouts. What say we just look at the nice pictures and make some snap judgements?
You might recall that the Rams' plan called for a complete gut rehab of the Jones Dome from the exterior right down to the field. The CVC plan is more modest in imagining what needs to be done to the exterior structure, requiring "a dynamic building expansion at four concourse levels: the main, suite, club and upper terrace concourses." It would make the exterior of the Jones Dome look like this: 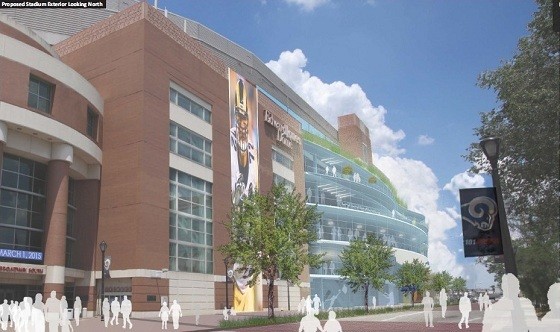 If you were actually on the concourse, it would look like so:

So, the CVC doesn't want to blow out all four walls, but merely expand the Broadway side of the Dome with wavy glass concourses. It looks to have much less of an impact on the day-to-day operation of the Jones Dome during construction than the team's plan would, which was definitely an issue for the CVC.What about the gloomy interior of the Dome? The CVC wants to add glass panels in the seating bowl to permit natural light to enter the building, which is a far cry from the retractable roof in the Rams proposal. In the CVC artistic rendering of this facet, the light that streams in is strong and plentiful and may, or may not, include a chorus of angels.

One of the recurring phrases in the CVC proposal is the "team's pageantry." It's a bold statement for a team with the worst winning record in the league for the past five years, but let's go with it. What this means is the team branding, photos and colors that saturate most modern stadiums. The Jones Dome, judging by the current photos of the facilities included in the proposal, is sorely lacking in this department.Observe. This is the current state of the courtyard between the convention center and the dome.

Can you say prison yard? Here's what that courtyard could look like:

So what's the total for all this improvement? There's no total included in the CVC's proposal, just as the Rams didn't stoop to price-taggery in theirs. But the CVC made sure to note in Section IV of the proposal that it has researched other NFL franchisees' contributions to new stadia construction, and that


"This data indicates that NFL franchisees have been solely responsible for generally providing over fifty percent of the proposed costs of the items included in these stadia projects. Therefore, CVC is only obligated under the Amended Lease to undertake and/or provide funding for less than fifty percent of the proposed costs associated with this plan, and the Rams have the obligation to fund the balance of the improvements."