Executive Inn in Belleville is Apparently the Worst Hotel Ever

A hotel in Belleville is making a name for itself in the national press -- unfortunately, it's for being nightmarishly awful. That's according to dozens of guests who spent a night at the Executive Inn and lived to complain about it.

Of 22 reviews on the site Trip Advisor (with names like "If you would like to die, stay here!" and "The only amenities were prostitutes and speed"), 21 rated the hotel "terrible." One kinder soul deemed it "poor."

"Oh sweet lord where do I begin :(," the most recent review begins. "The supposedly free wifi don't work, the tub, toilet and sinks were all clogged and backed up constantly. The water smelled like rotten fish, the ice machine was broke, there was a hooker that lived upstairs and did her job in front of her child!" 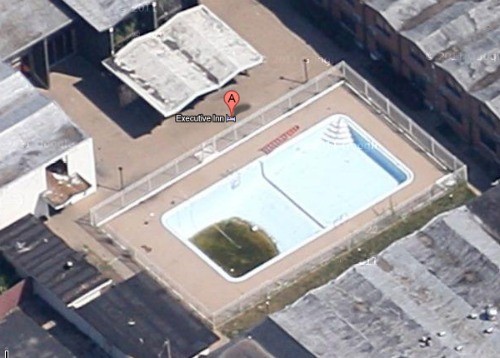 The reviews found fans on Reddit, which is where the blog Boing Boing picked it up, writing "Executive Inn in Belleville, IL: not a nice place to stay, evidently."

On the lower end of the hotel's woes is the lack of cleanliness. Several guests complained that they never saw a cleaning crew and the rooms were filthy. Along with the usual hair clumps and dust, others found more exciting amenities, such as cockroaches (both dead and alive), boogers, blood, bullet holes, and -- in one case -- both a pair of men's briefs and a broken crack pipe. Two reviewers claimed they fell ill from black mold growing in the rooms.

Then there are the other patrons.

"Sitting outside the room next to us was a man who asked us if my wife could "help him out" saying she must know what shes doing for us to have so many children," laments one former guest. "I was so disgusted and frightened that I quickly got my kids in the room."

This exceedingly normal-looking domestic batterer (Um, does he have a tattoo of himself?) attacked his girlfriend while enjoying the Inn's hospitality. A generally liberal attitude toward substance abuse, fighting, and prostitution seems to be common amongst some of the regulars.

"We were afraid to let our children do anything after finding out that there were people doing drugs in the hotel. We witnessed first hand someone on drugs. The police were called for the situation," writes one anonymous reviewer. "There was also a party going on during the night that spilled into the hallway and someone from the party pounding on the door of one of the rooms of someone in our group. The front desk did nothing to stop the noise."

Getting a refund from the Executive Inn is also tricky business.

Things got so bad for one lodger that he sued the Executive Inn for "unspecified" injuries sustained due to the hotel's dangerous conditions. He was so pissed he even went after the man who suggested he stay at Executive in his lawsuit.

We'll take the advice proffered on Mr. Domestic Battery's chest and "tell it like it is": Nothing sounds terribly "executive" about a night in the Executive Inn.