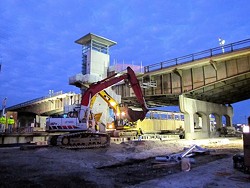 After 17 months of construction and refurbishment, public transit returns to the Grand Boulevard station this Monday, August 20. Both bus (#70 Grand) and MetroLink service resume first thing in the morning, as if the past year-and-a-half never happened.

But it did happen, which should be evident when you arrive at the spiffed-up station. New seating, elevators, stairs and improved lighting will enhance your Metro experience -- there's even a 58-car parking lot for you park 'n' ride people. Also be on the lookout for the new sculpture, and actual landscaping underneath the bridge at the Scott Avenue Transit Center.

But with the resumption of the #70 Grand bus route comes the cessation of that particular bus servicing Meramec to Jefferson and Chippewa. If you've been a beneficiary of that bit of rerouting, you'll need to adjust. Also note that both the #58 Twin Oaks Express and the #410 Eureka Express resume service to the Grand Boulevard station on Monday.

Updated routes and schedules for buses and the trains are here.