Basking in their post-primary glow, state GOP candidates ended a two-day "Victory Tour" just outside St. Louis yesterday. Daily RFT was there at a strip mall in Fenton, hoping to catch some Olympic gold medalists on their own better-known and more accurately-named "Victory Tour."

We didn't find Abby Wambach amid the stacks of GOP yard signs, but 300 or so STL-area Republicans were on hand to celebrate their slate and revel in partisan glory... however premature.

--"Obamacare" as the great social and economic evil of our time. --Good ole fashioned "American energy"---err cough cough coal--can and should make Missouri energy-independent. --Fun nonsequiter jokes about the Carnahan family. --Missouri's economy is in the toilet and Gov. Nixon, Sen. McCaskill, and President Obama want to turn the state into a dirty socialist, baby-killing sex club.

Roy Blunt served with Akin in the House of Representatives until 2010 when he defeated Robin Carnahan to become Missouri's junior senator. He is not up for re-election this year, but has been campaigning for Akin to replace Senator Claire McCaskill, whose name could not be said without hisses or guffaws at this rally.

"There are lots of good reasons to elect my friend Todd Akin to the Senate," Blunt said. "Todd and I were among the most conservative members of our delegation--and of the whole house. I'd love to have him right there with me again, but more importantly I'd like Harry Reid [D-Nevada] to not be Senate Majority Leader anymore."

As Blunt points out, the Akin-McCaskill race is a pivotal one for control of the U.S. Senate. If Republicans can gain four seats they will retake the Senate and McCaskill is widely viewed as the weakest link in the Democratic stronghold right now. 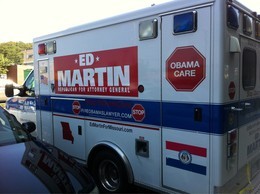 As Akin wrapped up his pitch for overturning Obama's healthcare plan and turning to coal and fossil fuels to resolve the nation's energy problems, he reflected on what has made America a great nation in the past.

"We've grown up in this land and there are a lot of things we've been through as a nation. We are the country that fought in both World War I and II," he said to applause. "We volunteered to tax ourselves to rebuild our enemies. How often does that happen in history? [a reference to FDR's Marshall Plan]"

Obviously, this was an irony-free zone.

As the awkward pall of this positive reference to taxation, government spending, and charity passed, Akin returned to his base's more familiar nutmeat. "We're a very unique nation and it's good to ask ourselves how we got this way," he said. "America is founded on the concept that our God blessed us with life, liberty, and the pursuit of happiness."

Yes. Thomas Jefferson and George Washington just sat back and let God do His thang. 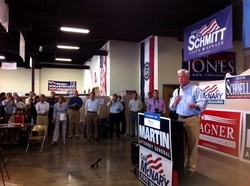 Kinder was the only candidate to acknowledge the many Tea Partiers who attended the rally.

"I'm so glad to see so many Tea Party folks here today," Kinder said upon taking the podium. "These are our friends and neighbors and we should welcome them into the new majority."

Kinder may have once been a Tea Party doll, but it seems many former supporters have been approaching the embattled incumbent with caution after Riverfront Times uncovered Kinder's rather unorthodox relationship with a former stripper last year.

Ann Wagner, the former ambassador to Luxembourg who is running to take over Akin's seat in District 2, organized this series of rallies billed as a "Victory Tour" [Can we just point out one more time "Victory" is a really big misnomer here?] and introduced each of her male peers before they spoke. In her introductions, she insisted that she could personally attest to the "character" and "integrity" of each candidate--except for Kinder, who she simply called "Missouri's true conservative champ". No mention of family values or Judeo-Christian morality there.

Kinder himself noted that "Missouri cares about the right to life of the innocent unborn" and said "that will be a big part of our victory in November."

Attorney General candidate Ed Martin incorrectly stated that Missouri is the only state that doesn't ban partial-birth abortions, an abortion procedure reserved for late-term pregnancies. Missouri is one of the 41 states that prohibits later-term abortions. Partial-birth abortions are performed in Missouri only when the mother's life and physical health are at stake, but the Show-Me State is hardly the only one with such exceptions in place.

Another issue that brought out the big gushy red cheers: mandatory photo ID for voters. Man oh man, Shane Schoeller, who is running for Secretary of State, is worked up about voter fraud.

"They might be here legally, but I think you'll agree with me that if you're not a citizen of the United States you shouldn't be casting a ballot in our elections" Schoeller said to surprising enthusiasm from the crowd.