SE Missouri Is Hardest-Hit By Drought, Yet Will Most Likely Produce Bumper Corn Crop 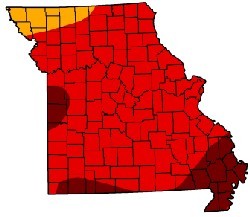 Southeast Missouri has been wracked by severe category of drought for much of the summer -- just last week the U.S. Drought Monitor report showed that the entire southeastern corner of the state qualified for D4 status, the most exceptional category of drought. On Friday, the USDA forecast that corn yields would be much lower than anticipated across the country. The national yield is anticipated to be 123 bushels per acre, while the expected harvest for much of Missouri is slightly more than half of that -- a mere 75 bushels per acre.

So you'd think that the Bootheel's corn harvest would be miniscule. And yet the estimate for that parched and scorched corner of Missouri is a whopping 153 acres per bushel.

Apparently, the extreme heat and lack of precipitation is no match for the Bootheel's flatness. Because that corner of the state is so flat, modern irrigation techniques worked wonders in the fields, an advantage not shared by the hillier portions of the state. The corn crop down there is healthy despite the weather -- it'll even exceed last year's average yield for the region, which ended up being 149 bushels per acre.

Of course, last year's planting was delayed by flooding. On the farm, it's always something. But as the USDA noted in its report last week, despite the devastation wrought by this brutal summer, America's still on track to bring in its eighth-largest corn crop since records were kept.