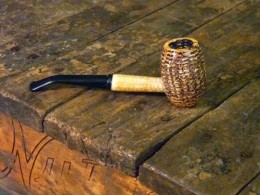 Washington, Missouri is the "Corncob Capital of the World." Yes, the world. (If you can't get your head around that, there's a museum in WashMo to help you.)

Folks have been making corncob pipes there since about the end of the Civil War, yet only one company is still standing strong: Missouri Meerschaum. They apparently make 5,000 pipes a day and ship them the world over.

However, the horrible drought this year has affected even that mighty firm.

General manager Phil Morgan told Pipes Magazine last week that while the drought will not affect production of the popular smaller pipes,

The impact for Corn Cob Pipes is that production will be cut in half for large pipes....This does create a loss in sales of tens of thousands of pipes, and much greater numbers when measured in dollars.

Some people really like the big pipes. Like this guy, Scott, who started his own company, Aristocob, to trade them on eBay. He's surprisingly active on YouTube. He has his own channel. And he seems genuinely bummed about the lack of large corncob pipes: