The Indianapolis Colts had just scored their third touchdown of the game -- on the way to a 38-3 rout of the Rams on Sunday -- when Fox broadcaster Andrew Siciliano turned to his partner in the booth, Marshall Faulk, and delivered a sermon of sorts about how important it is for St. Louis fans to pack the Edward Jones Dome this year -- to be the "12th man" for the team.

Yeah, right. For what?

Sure, it's only the preseason, and only the first game at that, but Jeff Fisher's Rams failed to inspire yesterday in a game that provided all the signature hallmarks of the Steve Spagnuolo era.

Putting the Foot in Football
You know your team is shitty when the kicker and the punter are the two most potent players. Thus far in 2012, the Rams are staying the course. Rookie Greg Zuerlein (Western Missouri) scored the only Rams' points yesterday with a 37-yard field goal. Rookie punter Johnny Hekker did an admirable job of pinning the Colts in their backfield. Still, is punting anything to really cheer about? 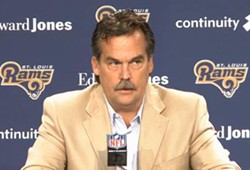 "O" Where Have You Been?
Perhaps the Mars rover will beam back some images of the Rams offense. Martian soil is one of the few places left to search for the "O" that's been missing since, oh, 2005. While Indy QB Andrew Luck looked like the second coming of the Peyton Manning he's supposed to be, Sam Bradford continued to look like, well, Sam Bradford -- a first-round pick still desperately needing to live up to his potential. Yes, Bradford was 7 for 9 passing, but most all those were the ho-hum short-yard variety -- and nothing like the 63-yard touchdown strike that rookie Andrew Luck made right out of the gate in the initial 12 seconds of the game.

Send Some Help Right Over
It doesn't help that the Rams' offensive line yesterday was as terrible as it's been the last few years, providing little protection to the quarterback. Meanwhile, the defense remains as penetrable as a kindergarten game of Red Rover. The Colts blew right though the defense on the way to 430 offensive yards to the Rams' 215 yards.

I'd go on, but truth be told, I turned the TV off after the first half. And perhaps the losing is a good thing.

If after next season the Rams move to Los Angeles -- as widely speculated -- we here in St. Louis would hate to lose a good team. But a team reminiscent of Spagnuolo's -- or the one we witnessed Sunday in Indianapolis? Parting with a team like that would sweeten the sorrow. Just don't expect us to fill the Edward Jones Dome to watch it.