Cards Split With the Giants; Adam Wainwright Does a Thing 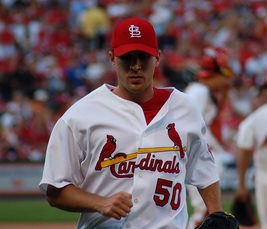 Thank god for Adam Wainwright.
I've said it before over the past four or five seasons, but I think it bears repeating now and again. Thank god for Adam Wainwright.
It's been a great ride, watching Wainwright progress from hyped prospect (acquired in return for J.D. Drew way back in the 2003-04 offseason), to World Series curveball hero, to ace starter and Cy Young contender. Last season, seeing the Cardinals try to find solutions for the rotation without Wainwright was flat-out painful at times. Chris Carpenter finally had to sell the next year of his arm's life to the devil late in the season in order to make it through the playoffs. More times than I could count throughout the year, both regular and postseason, I found myself thinking, "Man, if this team just had Wainwright healthy."
He spun another gem yesterday, working seven innings of one-run ball en route to his tenth victory of the year, moving him to an even .500 for the season. The numbers still aren't Wainwrightian quite yet; his 3.90 ERA is the highest of his career -- not counting his two inning late-season audition back in 2005 -- but the signs are all pointing in the right direction, at least.
In his last five starts, Wainwright has a 1.73 ERA, has held the opposition to just a .510 OPS against, and a 35/5 K/BB ratio in 36.1 innings. Now those are Wainwrightian numbers, and just when the Cardinals need them the most.
Actually, it's a little unfair of me when I talk about the numbers not looking a certain way. Wainwright's peripherals have been at least close to elite pretty much all season; his K/BB ratio and things like that have been among the best of his career. But the runs allowed have reflected a pitcher struggling to find a consistent groove and stay there. A good start would be followed by a five inning, five run clunker. A little more hittable than we're used to. One or two extra pitches left up and in the middle of the plate, or even just one flat cutter that would find its way over the wall. Nothing unusual for a pitcher returning from Tommy John surgery, of course, but not exactly the kind of consistent excellence we've come to expect from this particular pitcher.
Now, though, it all seems to be coming together for Adam. I wish the same could be said for the Cardinals themselves.It was a great win for the team yesterday, and nice to send the Giants packing back to San Francisco on a high note, but still, it could have been better. Probably should have been better. The Cards knocked around Matt Cain, as they almost always seem to do, but struggled to do anything against the ghost of Barry Zito. I don't care if he's left-handed or not; the Cardinals had no business being shut down by that guy. Period. Game three of the series, with Ryan Vogelsong and Joe Kelly on the mound, was really the only one of the bunch that got away from the team. Kelly was mediocre, the defense let the team down, the bullpen let the team down in a major way, and the offense was helpless against the inexplicably awesome Vogelsong. Hey, those things happen sometimes. You can't win them all. But the game against Zito sticks in my craw.

It's a shame, too, because in case you hadn't noticed, the Cincinnati Reds are in the process of crashing to earth as we speak. They've lost five in a row while playing Milwaukee and the Cubs (thanks, Brewers, by the way!), and their offense has struggled badly. The Cards have managed to creep within 5.0 games -- and 2.5 back of Pittsburgh -- but it could have been substantially better if only they could have solved the Zito Paradox.

When the teams ahead of you go on a slide, you have to take advantage. The Cardinals mostly have done so the past week, but that doesn't mean there aren't still missed opportunities in there to lament.

Still, a five game deficit isn't unreasonable, particularly for a team which has looked so ridiculously good at times this season. The Redbirds are still a full five wins below their Pythagorean record, still the only team in baseball with a triple digit positive run differential, and have gained two games in the standings on both Pittsburgh and Cincinnati over the past ten games. It isn't a stretch to say things are looking pretty good right now.

Tonight the Cards head to Philadelphia to take on the woeful Phillies. No other team in baseball has been quite so disappointing, yet the Cards are still going to have to see Roy Halladay and Cliff Lee in the series, which isn't an easy road to travel even if the team as a whole has struggled.

While the Cards take on the Phils, the Reds have three more games with the Cubs and the Pirates have three at home against the Padres. So, no help in either of those places. If the Redbirds want to continue gaining ground, they're just going to have to keep winning.