Yesterday's Missouri primary resulted in a few surprises. The biggest, perhaps, was Congressman Lacy Clay's stunning victory over Congressman Russ Carnahan for Missouri's First Congressional District that includes all of St. Louis and much of the county. Clay garnered 63.2 percent of the vote to Carnahan's 33.9 percent in the newly redrawn district that had the two Democratic incumbents battling for the same seat.

In the U.S. Senate race, Republican Congressman Todd Akin won 36 percent of the vote to win the Republican primary. Akin will face incumbent U.S. Senator Claire McCaskill in November. Akin's opponents, businessman John Brunner (who spent millions of his own money on the race) and Sarah Steelman captured 30 percent and 29.2 percent of the vote, respectively. 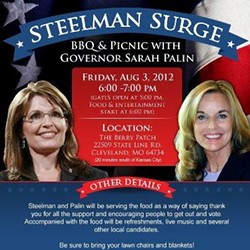 Democrat Jason Kander will face off against Republican Shane Schoeller for the Secretary of State office that incumbent Robin Carnahan is vacating later this year. And Tea Party favorite Ed Martin easily won the Republican primary for Attorney General with 71.6 percent of the vote. He'll meet Democratic incumbent Chris Koster in the general election.

As was predicted, the so-called "Right to Pray" initiative (a.k.a. Amendment 2) passed easily statewide with 82.8 percent of the vote.

In local elections, the St. Louis race for city treasurer also resulted in a bit of a surprise.

State Rep. Tishaura Jones won the Democratic primary with 34.92 percent of the vote, which all but guarantees her the job of treasurer in the Democrat-leaning city. Jones received little press in the run-up to the election but was able to best aldermen Fred Wessels (26.31 percent of the vote) and Jeffrey Boyd (25.5 percent ) and Democratic chairman Brian Wahby (13.27 percent).

Incumbent James Murphy squeaked out a victory against Vernon Betts for city sheriff, winning 46.19 percent of the vote in the Democratic primary to Betts' 43.83 percent.