Of Angst and Skorts: Advice to Cape Girardeau Kids with New Dress Code

High school just isn't high school without the asscracks. Kids in the Cape Girardeau public school district are grumbling this week about an excessive new dress code that will keep them looking like the cast of the Brady Bunch.

Students get to choose from the following: a collared shirt or turtleneck in any solid color, a school-oriented T-shirt, sweatshirt or hoodie or a solid-colored vest, sweater, sweatshirt or pullover with an approved shirt underneath; and pants, shorts, capris, skorts and jumpers in any solid color, or blue jeans (not too tight and not too baggy) or a solid-color dress with sleeves, a collar or a high-crew neck. Belts are mandatory for middle and high schoolers.

1. Viva la Gender Revolución! Somewhere, all the kids are doing it.

Nothing will freak out the adults in your life like boys who pair their pink shirts with a nice skort and bangles. Ladies, androgyny has been in for years, so this should be an easy one for you. Take it to the next level with some drawn-on facial hair. Mutton chops are totally making a comeback.

As far as we can tell, Cape Girardeau's dress code doesn't mandate any differences between genders, but if they did the ACLU would be on their asses pretty quickly. 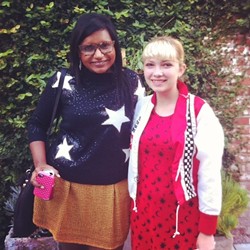 2. Hipster Irony or Dress Code? Skorts, vests, and turtlenecks? Sounds like Urban Outfitters fall catalog. Seriously kids, maybe those skinny jeans and so-thin-they're-effervescent tank tops y'all wear are off-limits now, but there are so many new ways to play this dress code off with that ironic hipster affect of counterculturalism.

Rob Horning argues that "the hipster" in its self-conscious irony, can be a force for social change. "The hipster is that person who shows up and seems to ruin things." It'll only be a matter of time before your public school overlords begin to "ask why this person [you] exists, whether he is inevitable, whether he can be stopped, and what it will take," just as so many others have asked from Cherokee Street to Brooklyn.

Sky's the limit for self-expression, kids!