The Cards Keep Running in Place 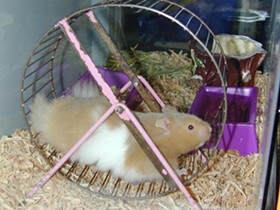 And just when things were looking so good, too.
The first two games of the series against the Rockies, the Cardinals looked like a team ready to kick ass and chew bubblegum but forgot to bring any bubblegum. An offensive explosion good for 20 runs in two games had the Cards poised for a sweep in spite of some rather shaky pitching. (In fairness, a fair amount of that shakiness was Colorado-assisted at the very least.) The Rockies are a really rotten team, and the Redbirds looked ready to do exactly what teams trying to chase down a postseason spot are supposed to do to really rotten teams.
Last night's 8-2 loss ruined all the good feeling, and all the perceived momentum, the Cards had managed to generate those first two games, in one fell swoop. A weak offensive performance against a mediocre (at best), pitcher and yet another instance of bullpen collapse ended a road trip that, at least going in and looking at the opposition's records, should have turned out much, much better than the ultimate 3-3 record Mike Matheny's bunch heads home with.
Three steps forward, three steps back. Even if the Cincinnati Reds hadn't decided to just not lose games anymore, you aren't going to make too much of a run in the standings doing things that way.
Really, though, it's been the way of this season overall, the constant missed opportunities and underachieving moments. This Cardinal team has the best run differential in all of baseball at +96, and there are plenty of very, very smart people out there who will tell you that number is a better indicator of a team's true talent level and quality than their actual won/loss record, which is often subject to odd vagaries and the whims of those dastardly, bastardly baseball gods. In other words, it looks on paper like the Cards are one of the best teams in baseball this year.
But, unfortunately, very few games are decided by rolls of a 20-sided die (oh, how I wish they were!), and in reality what we get instead of the juggernaut it looks like the Cardinals should be is the frustrating third place squad the Redbirds actually play like most nights.
That frustrating third place team is the same one that just went to Chicago and Colorado to play two of the worst teams in the National League, and came home with a .500 road trip to show for it. The same old story we've seen all season in 2012. Two teams with a combined winning percentage of less than .400, and the Cardinals, best run differential in baseball and all, eke out just a 3-3 record.
At least before last night the Cardinals had taken care of their business properly (read: kicking ass), against the Rockies. The Chicago Cubs have really been one of the major irritants this season, what with being one of the worst teams in baseball who also happen to give the Cards fits. The Redbirds are just 8-6 against the Cubbies, and that's including a sweep at Busch just a couple weeks back. Losing 3-2 to the Cubs this year has almost achieved real-life meme status for the Cardinals this year.
So what are we to make of this 3-3 road trip against the dregs of the National League? Well, you could cook up plenty of narratives, some of which might be accurate, others which might be complete and utter BS. And far be it from me to draw big conclusions from just a handful of games. But, in this case, I don't mind drawing a couple big conclusions.
That 3-3 road trip is exactly who the Cardinals are in 2012. In their three victories, the Cardinals scored 29 runs and outscored the opposition by 11 runs. In the three losses, the Cards scored just 6 runs, losing all three by a combined score of 15-6. The looked dominant -- and I mean flat-out dominant -- for three games, and then just couldn't seem to get much of anything right in the other three. When they play well, it doesn't seem like there's a team in the game that could take them down. Unfortunately, there's a big portion of the time when that isn't the team we see on the field. When instead we see the plodding, two-runs-a-game close loss machine.
In the end, the best thing I can say about last night's game is this: at least the final score wasn't close. The good people of St. Louis probably got a few precious extra minutes of much-needed sleep, since they were comfortable enough to turn the game off earlier. Those close losses, besides keeping that run differential misleadingly huge, keep us all on the edges of our various seats until the end, so we just end up both frustrated and tired the next morning.
"Frustrated and Tired: The Story of the 2012 St. Louis Cardinals." Has kind of ring to it, don't you think?