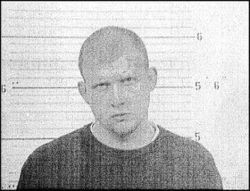 Citing "voluminous press coverage" of the case, 29-year-old Reggie Allen of Dupo, Illinois is requesting to be tried by a jury outside of St. Clair County on charges that he fatally mowed down Anthony Rice with his pickup truck outside an East St. Louis bikini bar in 2009.

Watch the video of the incident caught on surveillance camera, or read our feature story.

In his request for change of venue, Allen's attorney, Thomas M. Daley, cites "numerous" articles in the Riverfront Times, the Belleville News-Democrat and the East St. Louis Monitor.

Daley also cites "an unknown amount of flyers" distributed by the victim's family members, who in the months after Rice's death organized public protests and insisted Allen was to blame.

"The extensive publicity surrounding this case is so prejudiced against the defendant that he cannot receive a fair trial in St. Clair County," Daley writes.

Since the City Nights incident in October 2009, Allen has been charged with the following:

Records show he is out on bond.

The hearing on Allen's motion for change of venue is October 4 -- one day after the third anniversary of Rice's death.