Lately Damon Davis and Lenard Blair have been using cotton as their canvas and it suits them to a T.

Civil Ape, the Cherokee Street creative collective and studio space, is looking to Kickstarter to launch their latest venture: a line of screen-printed apparel baring their unique designs.

Daily RFT spoke to Davis (of hip hop duo Scripts N Screwz) and Blair last week about getting creative in St. Louis and where they see Civil Ape heading in the future.

Davis and Blair founded Civil Ape, which now includes half a dozen other independent artists, two years ago after both were laid off from more traditional jobs at design firms when the recession hit. They're now based out of a cavernous basement beneath the Nebula Coworking Space, a former government probation office, in the heart of the burgeoning Cherokee Arts District. 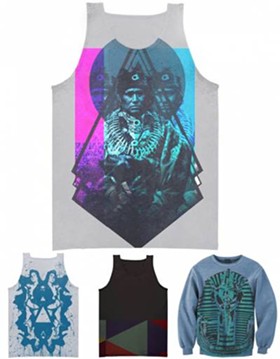 "I never cared about how I was making art," Blair says. "I just wanted to paint and get by off of that. So we're experimenting with delivery, but it's the same kind of art we've always created."

Civil Ape have been dabbling in apparel since 2010 and found that people would buy their art printed on a t-shirt or sticker when they couldn't afford paintings or large-scale work (which is almost always, when you're talking about a young, creative class). On Kickstarter they're fundraising for equipment for a dye sublimation system to expand their screen-printing operation and open up new revenue streams.

Blair says Civil Ape really believes in a DIY philosophy. "Roberta", the 4 color screen printing press they built from scratch two years ago, is a testament to that.

Crowdsourcing donations is one of few strategies independent artists can use to sustain themselves and their work. This is especially true in St. Louis, according to Davis, where the infrastructure for creative types is only just emerging.

"It [St. Louis] can eat whatever soul you have," Davis, a native of East St. Louis and St. Louis University grad, says. " I always say, if you can make a living as an artist here, you can make it anywhere. St. Louis is a place that just wasn't built for art."

Blair and Davis emphasized that with 40 donations of $100 they can take their apparel business to the next level. Their Kickstarter campaign ends in six days and has some pretty awesome gifts for donors.