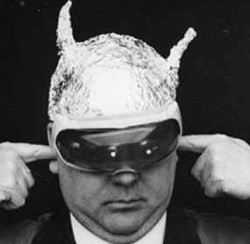 Fairview Heights police received an unusual phone call this past Saturday. A man was behaving suspiciously on the roof of the BP gas station at 6400 North Illinois Street. It was 11 a.m., so the caller had a good look at the man, and was able to describe him and the two men waiting in a parked car who seemed to be part of whatever it was he was doing.
According to the police, what he was doing was allegedly wrapping the BP's rooftop communications satellite dish in aluminum foil in the belief that this would block credit card transmissions, thereby allowing him to receive free gas.
When police showed up at the BP, they detained the dudes in the car, and found the second-story man in a nearby store.

The would-be infojammer has been identified as Anteaus D. Washington, 21, of Carbondale. He's been charged with burglary and attempted retail theft, and is being held on a $10,000 bond.
Does anybody know if aluminum foil actually blocks satellite transmissions? I'm, uh, asking for a friend. His neighbor blasts the TV at 190 dB all night, and he could really use some peace and quiet.