Updated below with a response from Spence's campaign.

Clearly, gubernatorial candidate Dave Spence wants you to see his TV ad entitled, "Sinking." It's the first thing that pops up when you visit his campaign site.

Makes you wonder: Does he know it contains a huge inaccuracy?

The spot opens on a shuttered industrial building with Spence's voiceover: "After 65 years, this business shut its doors last year," followed by the on-screen words: "McHenry Truck Equipment: Closed in 2011." Spence continues: "It's the same all over Missouri. Small businesses are struggling to stay afloat with Jay Nixon in charge."

But Spence should probably find a better example to make his case: McHenry Truck Equipment did indeed close its doors in 2011 -- in order to move to its new location only four miles away, still within the city of St. Louis. As of yesterday, it was still open for business.

We know this because we drove out to the new location yesterday at 5525 West Park in the Cheltenham neighborhood (between Manchester Road and Forest Park). One sign hanging on a chain link fence (see photo below) and another on the front of the building both say, "McHenry Truck Equipment." We walked inside, where a gentleman emerged from an office refusing to answer any questions, saying only, "We don't have any political agendas here." 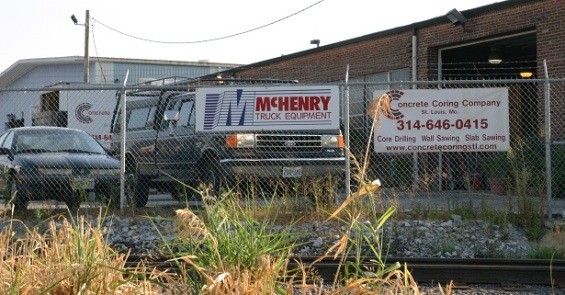 That's unfortunate, for it appears Dave Spence is trying to make McHenry a part of his own.

Spence got at least got some facts right: The company did begin in 1946, when, according to  its own website, "Elmer McHenry decided to take the skills he learned in a rural blacksmith shop to St. Louis where there was a demand for welders and metal workers."

For years, the business operated at 3838 Cote Brilliante in the Jeff VanderLou neighborhood, according to state records, with Charles Koors listed as president.

But in May 2011, it was administratively dissolved for failure to file an annual report. This seems to have been merely a paperwork issue: Throughout this time, Koors had another company to his name, National Rail Truck Inc., which filed last June to change its name to -- you guessed it -- McHenry Truck, at the new address on West Park.

All of which is to say that, despite some paperwork shuffling and a change of location, the same guy has apparently been running McHenry Truck Equipment for years. (And by the way, they still own the shuttered Jeff Vanderlou property too, according to city records).

It's conceivable that a Spence staffer saw that the business had been administratively dissolved, then wrongly inferred that it had shut down forever.

But Spence himself should know better: The exact same thing happened to his own company.

In February 1995, Alpha Plastics was administratively dissolved for failure to file an annual report, only to be reinstated several months later.

Spence's firm -- shall we say -- kept on "truckin'." Just as his campaign surely will.

We've put a couple calls into his campaign; when they get back to us, we'll update this post.

As evidence, Craighead points to McHenry's administrative dissolution in May 2011, which we've mentioned above. He then points to a KMOV Channel 4 story that aired two months earlier, which states (without attribution) that the industrial firm "struggled over the past several years and eventually was unable to stay afloat in an unstable economic time."

We've just discovered that McHenry's owner, Charles Koors, did file for bankruptcy as an individual last December. In his petition, he listed McHenry's value as "0", adding that "liabilities exceed assets." Daily RFT could not find any record that company itself declared bankruptcy.


"We guess the guy's trying to get back on his feet. My best guess is that National Rail Truck purchased the 'McHenry Truck' name or is trying to revive the McHenry name (a brand that's been around since 1946 is bound to have some loyal customers) and filed an LLC, but the McHenry Truck entity we used in the ad is now dissolved per SOS website.  The ad is 100% accurate."

Craighead confirms he's never spoken to anyone at McHenry. (As we mentioned, they won't talk to us either.)

It's like we said at the very beginning: Spence might do well to find a better example to make his point. Here's why: If the company did in fact fold for a brief period, and you're going to blame Nixon for that, then don't you have to credit Nixon for its re-opening, if you want to be consistent?

Check out the ad in question below.