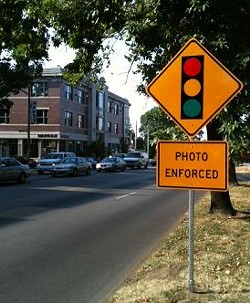 Mayor Francis Slay's office confirms to Daily RFT that plans are in the works to install eleven new cameras at a half dozen additional intersections in the city. Some of those cameras, including two at the intersection of Skinker Boulevard and Forest Park Parkway, went up earlier this summer. Once all the new cameras are up, the city will have some 62 cameras monitoring 31 intersections.


The mayor's office defends its ability to add more cameras even though St. Louis Circuit Court Judge Mark Neill ruled in February that the city's ordinance is "void" without enabling legislation from state lawmakers, who have so far failed to address the issue in Jefferson City. Neill also found that the the language on the citation violated due process by not making it clear that a red-light runner could contest the ticket.

The city has since changed the wording on the citation and is appealing Neill's ruling that declared the ordinance void.

In an email response to Daily RFT the mayor's office stated:

Under the terms of its initial contract with ATS, the city keeps $68.67 of each $100 citation collected from violators. To date that has meant some $17 million in revenue for the city since the cameras went up roughly five years ago. ATS gets to keep the difference ($31.33 per citation) in return for installing and operating the cameras at no cost to the city.

Surprisingly, perhaps, the mayor's office tells Daily RFT that it's seen no decline in payments since Neill's ruling in February. And while the city says it could issue warrants for those who ignore the tickets or fail to appear in court, it chooses not to do so. Instead, it sends unpaid tickets to a Texas-based collections agency, which last we checked, could not impact someone's credit rating should they choose to ignore the collection agency as well.

A list of intersections scheduled to get cameras this year follows:
· NB Skinker @ Forest Park