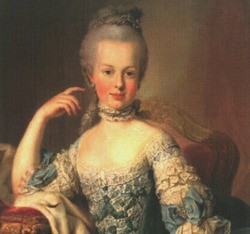 Well, that didn't take long. After Friday's purge at the Post-Dispatch, someone took to Twitter on Saturday to give voice to Mary Junck's inner Marie Antoinette. MaryJunckFake has thus far exhibited an interest in executive bonuses, flirting with Bill McClellan and a brutal disregard for feelings of her demoralized staff.

Wuz up bitches! It's Monday, chant your Lee prayer card & get to work. It's a great day & you're lucky to have jobs working for me, smile.

I dunno, it seems like it could really be her.

After the jump, some of the more interesting tweets from Queen of Davenport.
Despite the tone of this morning's wake up tweet, she's not entirely insensitive to the feelings of her staff. Well, not all of her 'em. There seems to be a genuine fondness for the P-D's sales department:

@MattStewartSTL I love you sixth floor people. You guys are the bomb because you make me money, not like those revenue sucking journalist

She fancies herself as quite the athlete as well.


@PDelizabethe Lee's corporate softball team, the Soul Suckers, would club y'all like baby seals with our bats made of solid gold

Despite her trash-talking bravado, MaryJunckFake seems to harbor some warmth for at least one member of the editorial staff -- or is this tweet more menacing than inviting?


MT-"@Parkerson: Thank you, @Bill_McClellan for including @skevinparker and me in your column" Bill, call me at the Ritz, I'll be in the spa

On second thought, it's probably menacing.


And yet despite the naked greed, the transparent attempts at ingratiating herself with certain staffers and yes, more greed, this version of Mary Junck seems to have a smidge more self-awareness than the real deal.


Listen @reaganbranham its hard being me.It's not just any executive that can bankrupt a company as quickly as I did.1.5 Billion to zero!