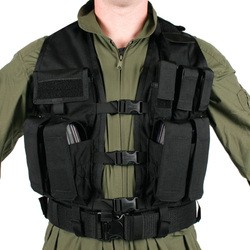 After James Holmes allegedly murdered 12 people in an Aurora movie theater, it didn't take long for authorities to trace his arsenal back to the original sellers. That included items purchased online from Chesterfield-based Tactical Gear.

The company's owners have been criticized for selling Holmes a "Blackhawk urban assault vest," two magazine pouches, and a "Be-Wharned" silver tactical knife for $306.79, and shipping it 2nd Day Air to him early this month.

Now, the company has released a statement saying their employees are being threatened.

Once the connection was made to Tactical Gear, this post was put up on their Facebook page. To be clear, TG specializes in the kind of gear and armor Holmes used, they do not sell guns:

Everyone at TacticalGear.com is shocked and appalled that the alleged shooter purchased tactical gear from us for use in this horrific attack. We process thousands of orders a day which include this type of equipment and there was nothing unusual about this particular order. We primarily serve members of the armed services and law enforcement professionals. Our thoughts and prayers are with the victims and their families of this terrible trajedy.

The company's COO Andrew Hoefener then gave an interview to KMOV, saying "I think if any additional scrutiny needs to be paid, it's probably to ammunition sourcing online and firearms, and how those are purchased."

Those sentiments got the company in trouble with everyone. Second Amendment advocates condemned Hoefener's statements, other critics refused to believe that Holmes's order was properly vetted. One Salon.com article specifically mentioned that Holmes's protective gear and its ready availability is scarier than his arsenal: "The best way to stop a good guy with a gun is a bad guy with body armor. And judging from Holmes' vest receipt, he wasn't even buying the serious stuff."

Now the company CEO Chad Weinman is speaking out one more time on behalf of his employees, saying they've been brought to tears with calls accusing them of having "blood on their hands" and receiving threats. It emphasizes that the company is pro-Second Amendment and rattles off the whole "if someone in the theater had had a gun" thing:

In the wake of the tragedy, we have done our best to cooperate with the media and law enforcement agencies by passing on any relevant information. We have since been inundated with countless phone calls, emails and interview requests. Much of this communication has been quite hostile and threatening in nature. We have been falsely accused of selling Mr. Holmes firearms and ammunition over the Internet illegally without conducting the mandated background checks. Some members of our customer relations team have been brought to tears by people insisting that we have "blood on our hands." . . .

We want to set the record straight and publically state that we fully support the 2nd amendment. The spirit of what we were trying to communicate was that tactical clothing and equipment should not be put in the same category as firearms and ammunition. Firearms and ammunition are subject to considerable regulation, and the notion that tactical gear should be as well is outrageous. Unfortunately, in some instances our choice of words were poor and misguided. For this, we accept full responsibility and sincerely apologize to anyone that took offense to these comments.

I am very proud of TacticalGear.com. It is a great company with a great staff. Each day we wake up thinking about how we can better serve our customers the gear they need when they need it. We work tirelessly to achieve these goals, and we are passionate about what we do. Many of us are avid gun owners and enthusiasts. We frequently visit the local shooting range and keep firearms in the office. We wholeheartedly support the freedom Americans enjoy to legally purchase guns and ammunition. I personally believe that if some members of the audience had concealed carry weapons at hand that night perhaps less blood would have been shed. No amount of gun control is going to prevent a sociopath hell-bent on terrorism from hurting a large group of people.