Check Out the Stylin' New Fixtures on the Grand Bridge 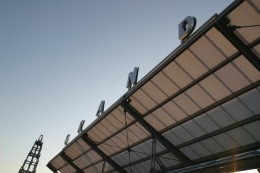 At 6:45 am this morning, there were still some hard-hats working on the median of the newly-opened Grand Boulevard bridge, and cones still line the pavement.

But for the last 10 days or so, cars have been zooming across once again, and -- to be honest -- this thing it's pretty cool-looking.

Take a peek at the new fixtures after the jump.


There are four such towers on the bridge:

Here's a view of the west Metrolink access point from across the street:

Here's where you can sit and relax: